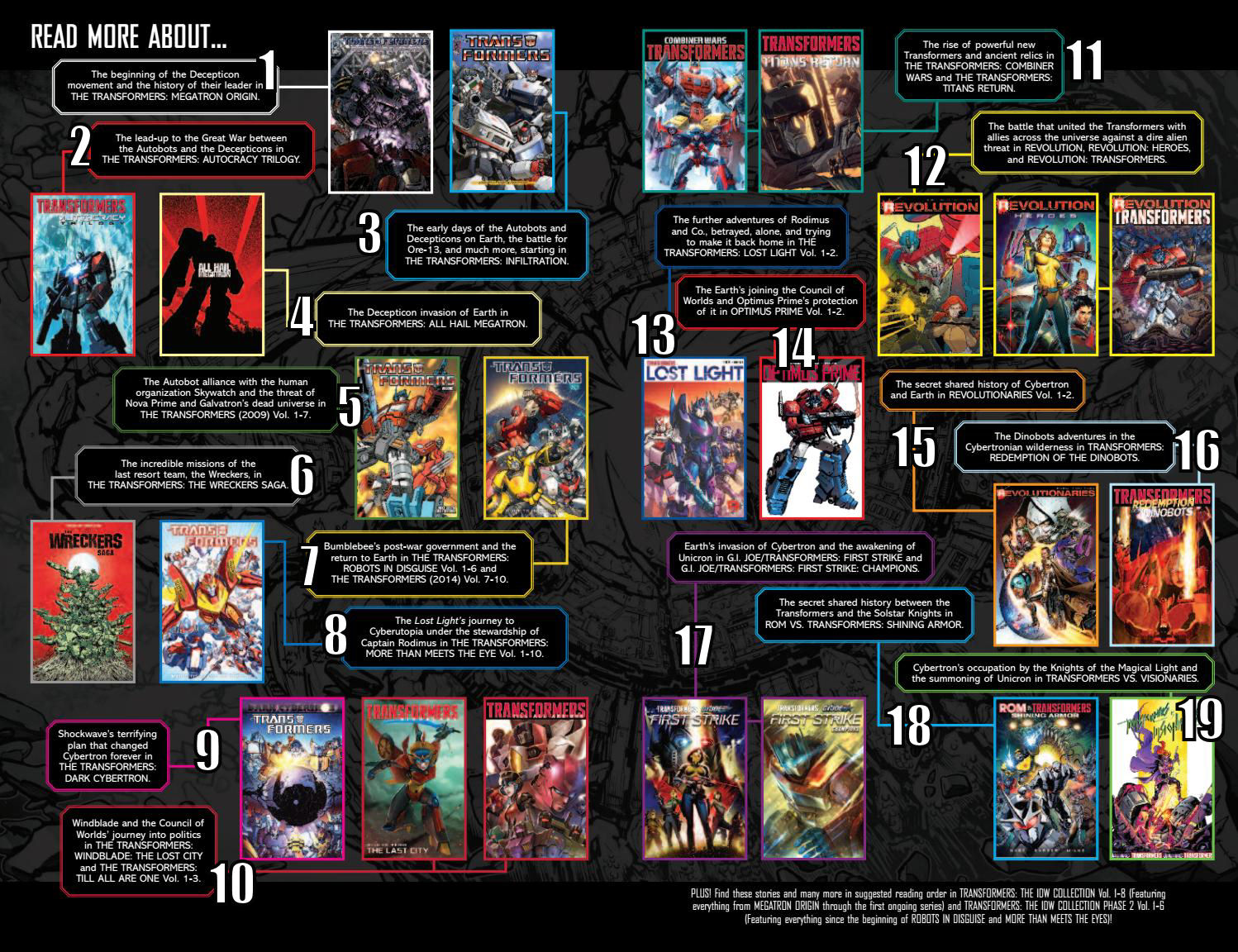 IDW produce a handy guide for new Transformers fans before the universe is wiped out but don’t include an order sequence.

IDW’s Transformers Universe is being rebooted in August at Hasbro’s insistence, so IDW released an image detailing the reading order of all essential Transformers IDW comics but it’s something of a mess with no indication of an order. We’ve included the numbers to make it somewhat easier to follow, the image above can be clicked to view full size.

IDW took over the Transformers comics franchise in 2005, hiring fan favourite Simon Furman who had written extensively for the Transformers comic during the 80’s, getting him to lay out the plot for a rebooted and modernised story. Initially the series was met with mixed reviews as it was slowly paced and didn’t feature Megatron or Optimus Prime, but Furman listened to the fans and catered to them while also establishing a more mature tone for the series. The introduction of one off Spotlight comics helped to strengthen characters or sometimes completely revise their personalities while the main storyline continued in short arcs.

In 2012 IDW split the main Transformers series into two distinct series – More Than Meets the Eye and Robots in Disguise. MTMTE dealt with a group of Autobots going off to explore the universe while RID focused on a post war coalition of Autobots, Decepticons and unaligned Cybertronians trying to re-establish order on their home planet. These new series gathered momentum and attracted many new fans but the huge Dark Cybertron crossover was a let down and led into the cast of MTMTE being changed and RID moving to Earth. Most controversial of all was Megatron becoming an Autobot. RID fell into the standard human/Autobot/Decepticon war and lost everything that made it unique while readers left MTMTE as it became increasingly ‘progressive’ with more characters entering into seemingly same sex relationships, political commentaries, a glut of new characters taking the spotlight including ones that would be featured as they had a toy coming out. In the space of two years IDW’s Transformers comics lost around a third of their readers.

In 2016 Hasbro charged IDW with launching a number of Hasbro’s properties including MASK, Rom: Space Night, Visionairies, Micronauts and Action Man but those series all ended up being cancelled after less than a year due to poor sales – MASK #1 sold just under 10,000 copies but had fallen to less than 2,000 copies each issue in less than six months. Transformers will be rebooted later this year as Hasbro presumably try to raise sales and bring the franchise back closer to its roots.

If you want an exhaustive chronological order of IDW’s Transformers comics then check out this entry on Wikipedia.

You can buy Transformers t-shirts and merchandise in our online store.