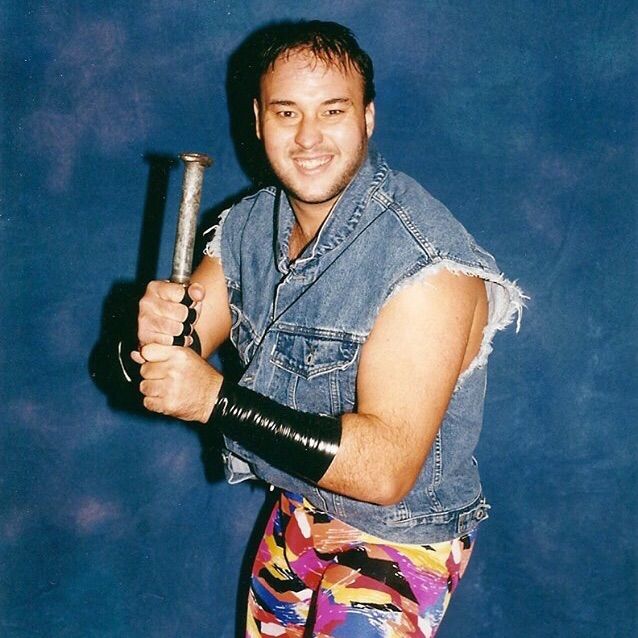 The top spot in our countdown of lesser known shoot moments in wrestling features Doug Gilbert going nuclear on everyone!

I’m sure a lot of readers are thinking, “who?” as Doug Gilbert isn’t perhaps too well known anymore.  Doug was much like Owen Hart, Chris Von Erich and Chavo Guerrero in that he was overshadowed thanks to relatives who had already established themselves; in Doug’s case his older brother Eddie Gilbert and their father Tommy.  Doug debuted in 1986 aged only 16, joined Jim Crockett Promotions but left after only 6 months after it was re-branded WCW in 1989 as Eddie left the company over a dispute and Doug, being a Southerner who put family before everything else, left with him. He had a successful run as a tag team with Midnight Express creator Dennis Condrey in ICW  before jumping to the USWA where he had two tag title reigns with Tony Anthony. In 1992 he joined up and coming promotion the Global Wrestling Federation where he wrestled under a mask as Dark Patriot to feud with super over babyface The Patriot, becoming the promotion’s second North American Heavyweight Champion. He then went on to wrestle in Japan and the USWA before joining his brother in ECW where they won the tag titles. Eddie fell out with ECW owner Todd Gordon and once again, Doug Gilbert backed his brother up and walked out of the company with Eddie. Doug returned to USWA and had a successful run as their champion in a feud with Brian Christopher but in 1995 Eddie Gilbert passed away from a heart attack aged 33.

Doug’s career still went well as he appeared in the 1996 WWF Royal Rumble, joined Ohio Valley Wrestling and picked up more regional titles wherever he went.  In 1999 Gilbert was working for Randy Hale’s Memphis based Power Pro Wrestling, a company which was helped out by Jerry Lawler and had become a development territory for the WWF. Doug had gone on a 3 week tour of Japan while PPW did TV shows furthering the Doug Gilbert/Tommy Rich vs Brian Christopher/Spellbinder feud. After a 14 hour flight back from Japan, Doug Gilbert arrived back in the US on Friday the 22nd of October ready to appear on a live PPW TV show the next morning but when he switched on his mobile phone, he had numerous voicemails warning him that he wasn’t going to like what had been on TV in his absence.  The first show had featured a skit where Christopher impersonated Gilbert while Spellbinder impersonated Rich but another skit featured the pair dressed as Gilbert’s parents, claiming that Tommy Gilbert used Viagra, wore a nappy and that Doug was the result of an affair that Gilbert’s mother had with the ice cream man. You can see the promos on CheaptHeatTV’s YouTube channel.

Gilbert had no problem with the impersonation of himself but remember we said he was a family man? Well he had a huge issue with the impersonation of his parents, especially his mother. Believing that Randy Hale and Jerry Lawler had approved the skits, when Gilbert got to his segment on the live TV show, he unloaded on everyone – first he and Rich ran off Spellbinder and Christopher with Gilbert delivering stiff punches and a toe kick to Christopher before the pair spoke with interviewer Dave Brown. Rich went first claiming that Spellbinder would be 110 lbs if he wasn’t taking steroids but when Gilbert spoke, he made Rich’s comments look mild. Confirming with Brown that there were certain subjects that were off limits, Doug Gilbert said that if Brian Christopher wanted to talk about family then he’d talk about Christopher’s family and the only reason Christopher had been so successful in Memphis was because his dad, Jerry Lawler, owned the company. While their being related had been referenced on WWF TV, in Southern promotions the link between the two was heavily kayfabed and never acknowledged.

Doug Gilbert then turned his attention to Dave Brown, pointing out that it’s possible to control what was shown on TV so when Christopher came out dressed as Gilbert’s mother, Brown could have gone to commercial break but chose not to. He then told the audience that Randy Hale was sat upstairs in the studio and could cut the broadcast off at any time if Gilbert said something again he wasn’t supposed to like how Hale smokes crack.  As Brown denied the allegation and said that maybe they should cut to commercial now, Gilbert said how Brown gave everyone else a chance to speak so there was one more thing he wanted to say and promised to behave –

When the show came back from commercial break Randy Hale told viewers that Doug Gilbert was suspended indefinitely.

Lawler and Hale had a huge argument that ended their friendship, the WWF withdrew from PPW and PPW’s main angle had to be dropped without explanation, all of which led to PPW going out of business not too long afterwards. Hale went on to apparently manage a local fast food restaurant.

Doug Gilbert went on to wrestle for regional organisations of the NWA and other independents until around 2011 as the shoot killed off any chances he had of working for larger companies. He has since made up with Lawler, Christopher and Hale.

Spellbinder won the PPW Heavyweight title before the company folded and appeared on NWA: TNA’s first broadcast under his real name.

Brian Christopher was part of the team Too Cool at the time in the WWF but was fired in 2001 for smuggling drugs across the Canadian border. He would have a run in NWA: TNA but has primarily competed on the independent circuit.

Jerry Lawler would attempt to strong arm Vince McMahon into not firing Lawler’s wife Stacey Carter in 2001 but it would fail, leading to Lawler leaving the company. He would return later in the year, was inducted into the WWE Hall of Fame in 2007 and still remains signed to the company.