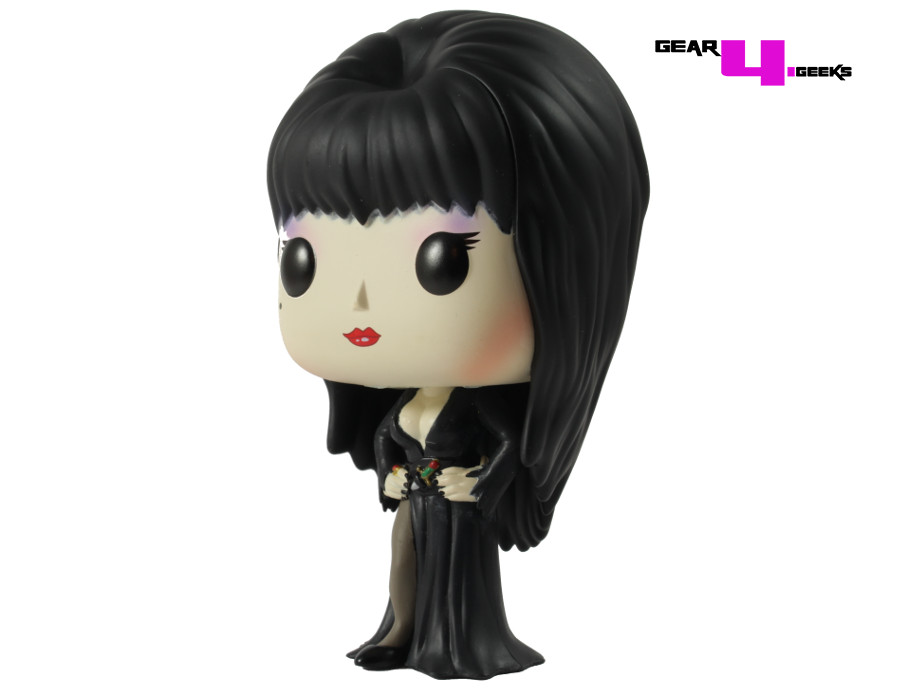 The Elvira Funko Pop may be a mystery to younger collectors but Starscream’s Toast has the lowdown for you with this gallery and review.

Elvira, the Mistress of the Dark may be pretty unknown to the younger people reading this but to those of us who lived through the 80’s vividly ahem remember her. Played by actress Cassandra Peterson, Elvira was the host of Elvira’s Movie Macabre, a  weekly show on an independent TV station which featured horror B-Movies. Peterson based the character’s appearance on Morticia Addams but gave her a ditzy but quick witted character to avoid the cliche of the dark vampire. The show debuted in September 1981 and Elvira soon became a household name thanks to her wit, charisma, that dress and well, to be frank, her chest.

The Elvira Funko Pop captures Peterson’s likeness pretty accurately although the  hair has been downsized a fair bit, presumably to make her a standard Funko size. Her chest on the other hand, hasn’t been downsized which is somewhat surprising.

The back of the box has the classic photo of Elvira just in case you weren’t familiar with her. It’s a shame that Funko don’t include small biographies on the backs of their Pop Vinyls for the less obvious characters but I guess that would detract from the simplicity of the packaging.

The pop vinyl has a nice touch with the exposed leg accurately depicting Elvira’s dress which didn’t have a slit in it, it was actually cut in a wedge to make sure her leg was always on show. Funko have paid attention to detail as always by including her sacrificial dagger and jewellery.

From the back the Elvira Funko Pop is pretty much purely hair, true to the real deal.

It has to be said that Elvira is an odd choice for the Pop Vinyl treatment although after so many years of figures it makes sense that Funko would spread the net a little further. The Elvira Funko Pop is a nice recreation of Cassandra Peterson’s iconic character and one well worth buying although we’ve long sold out on our store. You can still get one from Amazon though (affiliate link) and you can pick up the Elvira movie while you’re there. As with all affiliate links, clicking and using it to buy something will cost you nothing extra but Amazon will give us a small percentage of the sale.