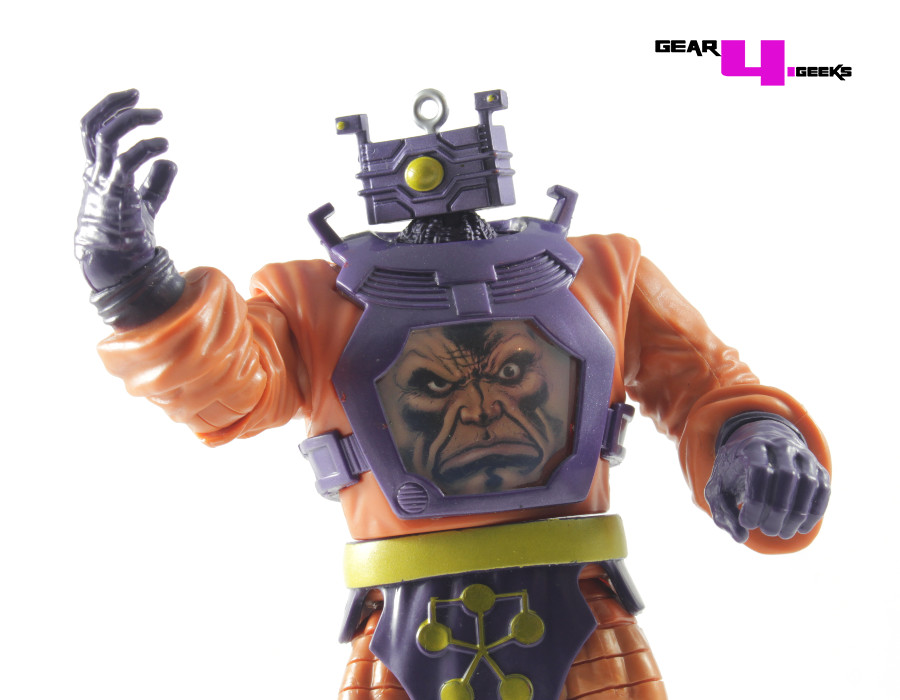 From 2012 we bring you a small gallery and review of the Marvel Legends Arnim Zola Build-A-Figure.

Once upon a time there was a series of figures called Marvel Legends and each figure came packed with a body part that could be combined to make a really cool bigger figure, like a Sentinel, Apocalypse or Galactus and then it all went downhill for a number of years. While the build-a-figure concept was always a cool one, it is currently quite hit or miss and 2012’s Marvel Legends Arnim Zola is firmly in the ‘miss’ category. Firstly, apart from The Red Skull and Crossbones, most of Captain America’s enemies are fairly lame and Arnim Zola is probably at the top of that mountain. A Swiss scientist who joined the Nazis and then prolonged his life by transferring his consciousness into an orange jumpsuited robot, Zola probably isn’t at the top of any kid’s must have list let alone the collectors. The parts were packed in with a pretty cool line up of figures which consisted of Heroic Age Captain America, Daken (masked/unmasked variants), Piledriver/Thunderball, Madame Masque/Madame Hydra, Drax the Destroyer, Fantomex and Spider-man (Big Time/Future Foundation variants) which is a decent line-up if you can excuse the total nightmare of having one wave of figures that gets repacked with different figures after a while. When the variants were colour changes that was fine, but totally different figures? I can’t understand how anyone kept their sanity collecting Marvel Legends pre-2015.

The Marvel Legends Armin Zola BAF also comes with a variation – the version shown here with the Arnim Zola face in the torso or a Red Skull face. There’s also a variation for the mind control ‘head’ box with either the yellow sensors shown here or red for the Red Skull version. Oddly the Arnim face and the red sensor seem to be the rarer parts even though they aren’t the correct combination.

While the figure has the standard articulation there’s something weird and unlikeable about the figure – it seems like it’s a big figure that towers over the others so should be intimidating but it just looks goofy. Because of its size it seems like it should just stand around being menacing rather than holding Spider-Man type poses but there’s not a lot you can do with a big orange robot with constipated old man face who’s holding the TV remote.

If you were buying the set of figures anyway then I guess it’s a nice free figure to sell off and recoup part of the cost of the individual figures but I can’t see anyone eager to actively seek out a Marvel Legends Arnim Zola. I have this one simply from acquiring the parts in various BAF parts lots as there’s no way I’d have deliberately bought him to review for the site.  If you’re a fan of the character then you’ll love this figure as it’s a really accurate portrayal but it’s just not one for me.

If you want cool Marvel T-shirts and merch then check out our online store.