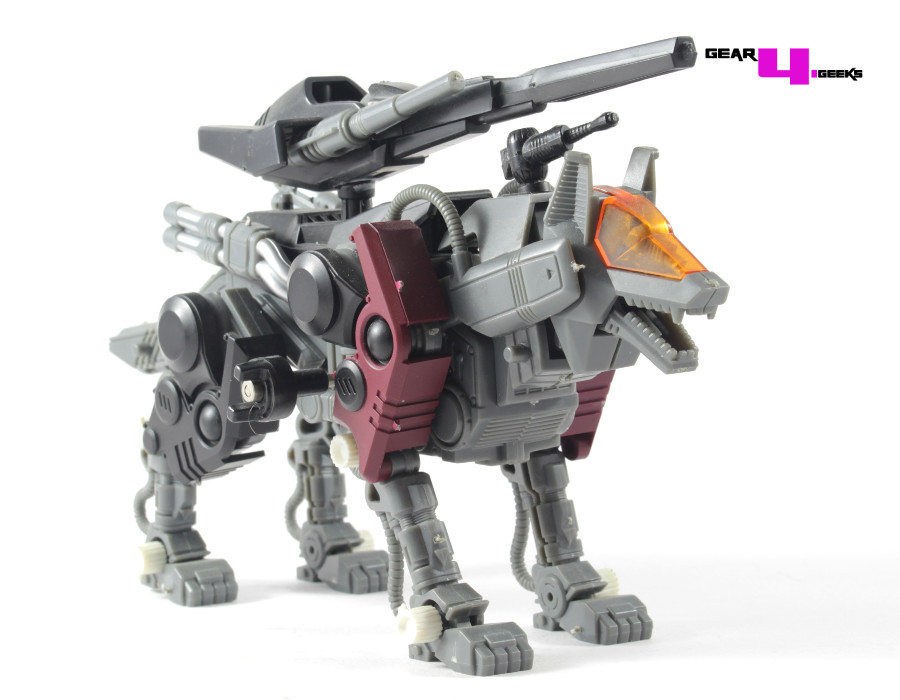 Starscream’s Toast brings you a gallery and review of Command Wolf Irvine from The Zoids: Build, Customise, Mobilise series.

This deluxe Irvine wolf type is an elite unit used by veterans and mercenaries. Cast in imposing burgundy and grey deco. Motorized legs spring into action! Two-speed running: lower the head for low gear, raise the head for high speed running! This edition features a unique long barreled dorsal cannon that holds one gunner! Movable jaws, neck, small weapons, and tail! Carries one pilot in head and one gunner in dorsal cannon.

Command Wolf Irvine was released in Japan in 1987 as Command Wolf then in Europe as Zarwolf during 1988’s short lived Super 1000 Zoids line. This version comes from the 1999 Zoids series, has a large cannon on its back which previous releases didn’t have and is now coloured in grey, burgundy and black armour instead of white and grey. The Irvine part of the name comes from the anime character Irvine who is seen piloting this colour Command Wolf in the Zoids: Chaotic Century anime, though the actual vehicle is a Command Wolf AC Zi-024; the regular Command Wolf has a small dual cannon on the back whereas the LC variant has the large cannon seen here. Irvine’s Command Wolf undergoes various modifications in the series but is ultimately destroyed in Zoids: Guardian Force by Raven’s Geno Breaker.

The toy is a fairly straightforward build consisting of 4 frames, a clear canopy, one gear, a wind up motor and bungs/caps. The toy has a cool feature where it walks at a fairly rapid pace but the head and neck can be lowered, changing the walking speed to a slower pace. Here’s a YouTube video I found of the feature in use, the fast pace looks like it’s having some kind of seizure! Mine also comes with a neck cannon which I’m not sure is actually supposed to be there (Edit: It’s not, so ignore it). The post of the large cannon is quite small and has a tendency to snap, making it hard to find unbroken Irvines unless you buy a sealed one.

As it says in the bio at the top of the page, the figure’s tail can be moved as can the dual smoke launchers on the back plus the jaws open and close which is a fair bit of movement for a Zoid. The Command Wolf is one of the most used moulds amongst Zoids seeing release as:

Command Wolf Irvine is a pretty cool toy, but I don’t particularly like it and I can’t put my finger on why. There’s nothing bad about it but it just doesn’t grab me like most other Zoids do, which is a shame as there are so many cool variations of it out there. Aesthetically I guess I just don’t find a robotic fox that intimidating, even if it is 26 feet tall.