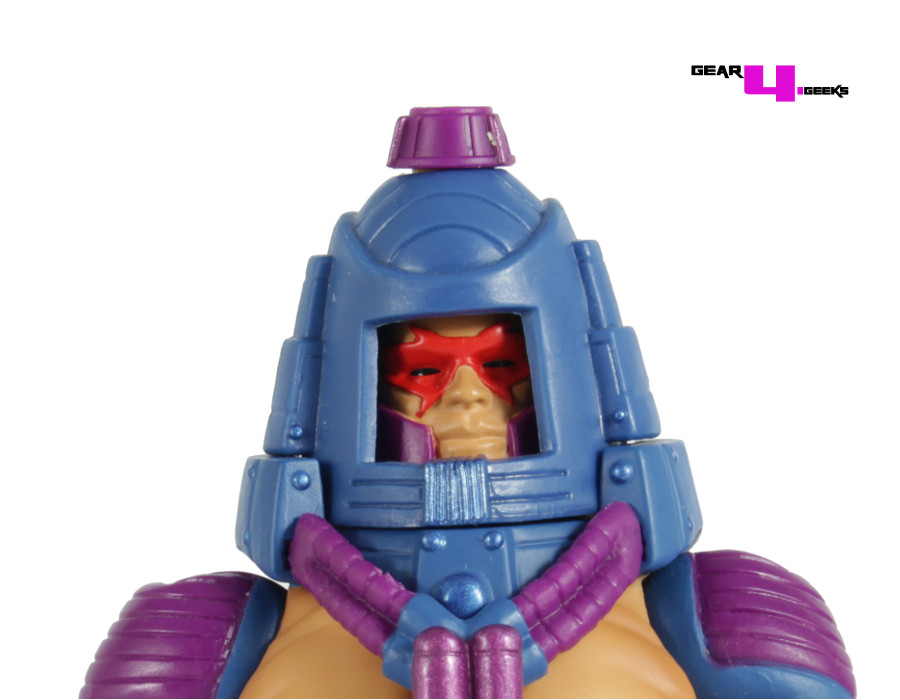 Man-E-Faces. Many faces. Gettit? This is one of the multitude of puntastic names that plagued Masters of the Universe characters during the original 1980s run, although Man-E-Faces has the dubious distinction of being possibly the first. The original release of the character was a standout for the line, as was the Four Horseman reimagining of the line in 2000 and with the Mattel Collectors Club Masters of the Universe Classics line updating the figures in 2011 with better proportions and more articulation, once again Man-E-Faces stands out as a great figure.

Perhaps the greatest actor on Eternia®, Perkaedo, the Master of Disguise, performed before King Randor™ and Queen Marlena™ at Prince Adam’s 18th birthday celebration. It was here that he drank a magic potion, created by Skeletor®, that transformed him into a terrible monster with great strength loyal only to evil. With the help of He-Man® and the Sorceress®, Perkaedo was cured from this transformation, but the process left him forever split between not just two but three personalities. He now uses his powers to protect justice in his greatest role: as Man-E-Faces®, the man who is three warriors in one – fighting as a human, robot or monster!

The Masters of the Universe Classics Man-E-Faces includes the standard 3 faces of human, robot and monster but also includes another three faces with He-Man, Skeletor and Orko for cartoon fans. With a fandom almost as divided between toy accuracy and cartoon accuracy as Transformers fans, Mattel asked collectors if they would prefer Man-E-Faces to come with his usual headgear or if fans would prefer the concept version shown on the boxart back in the 80s.

Naturally the results were mixed so Mattel made an odd decision and released this figure with a helmet which is neither the concept nor the toy nor the animation version but instead is a weird hybrid. The figure has plenty of articulation and despite the bulky upper body, tiny waist and giant head piece, the figure has pretty good balance and can be posed without a stand which I really wasn’t expecting.

There’s one minus to Man-E-Faces which is the big orange gun. I appreciate Mattel including it for the hardcore toy collectors who would want to have this gun but it’s a shame that they didn’t include a more proportionate black/grey version for a more realistic look. Well, as realistic as can be in a toy line about bodybuilding aliens riding sleds around in their underwear, beating the crap out of each other. Collectors have had issues with some of the Masters of the Universe Classics figures where there were joint problems and things of that nature, but Man-E-Faces’ one issue on that front is the peg on top of the helmet not sitting quite as flush as it could.

Overall though the figure is great though one does have to question why Mattel made the Masters of the Universe Classics line 7 inches tall instead of the industry standard 6″/1:12 scale.  Presumably they went back to the same thinking as 1982 where they wanted these muscular powerhouses to dwarf the more puny figures on the market. If so, then once again they are spot on because the 7 inch format works well here giving the Masters of the Universe a presence on any toy shelf.

The Masters of the Universe Classics Man-E-Faces figure is an older release from 2011 which means that the primary way of getting one will be via Ebay. Sealed ones will set you back a fair bit of cash while ones out of the packaging are much more affordable, but he’s worth the money especially if you have other figures from the range to display him with. Having said that, the price point of the new Super 7 Masters of the Universe line is pretty high too so this Man-E-Faces isn’t that expensive after all and it’s far more detailed than the Super 7 figures which are based on cartoon accuracy.