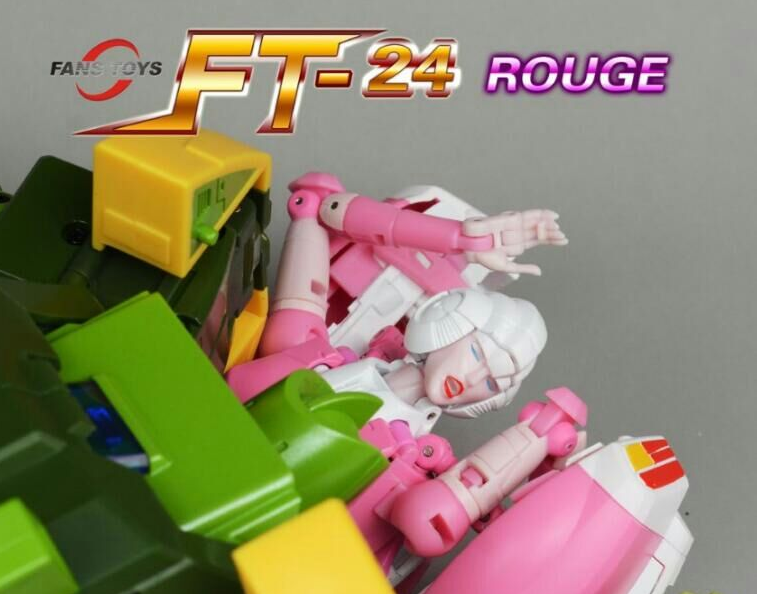 ‘Third Party’ company FansToys were hit by a wave of angry criticism today after releasing stock images of Rouge, their take on Transformers Masterpiece Arcee. The official images included one picture that appeared to be of FansToys Apache (Transformers Masterpiece Springer) and Rouge engaging in sexual activities, something that wasn’t appreciated by many collectors. Worse yet some collectors felt that the figures were deliberately posed with Rouge not enjoying the encounter and Apache forcing himself upon her.

Comments were posted on TFW2005’s forum  from unhappy collectors who weren’t impressed with some of the sexually suggestive images but especially the one above. (click to view full size)

Some fans expressed that they would be skipping FansToys Rouge altogether based on the controversial picture. Not all fans were upset though and fierce debate ensued until moderators started banning posters from the thread and deleting posts along with the image in question. While TFW bans discussions of moderators’ decisions, posters were critical of the censorship and the debate continued with one news poster defending Fans Toys and claiming that Fans Toys never released that particular image, despite it being the same dimensions as the others, featuring two figures which are test shots and having Fans Toys branding over it. We at Gear4Geeks received a solicitation from a Hong Kong wholesaler using the offending image in their email alongside the other official images.

FansToys Rouge is undoubtedly an impressive figure but it continues to highlight the sad attitude that exists in collecting circles and we anticipate endless sexual pictures to surface on forums once the figure is officially released.

Fanstoys Rouge is the latest drama to hound the company. FansToys have been considered for a long time to be the fan favourite of third party Transformers manufacturers – ‘companies’ that release unlicensed figures which haven’t passed safety laws and take advantage of China’s laws which do not recognise copyrights, trademarks or the intellectual property of non Chinese businesses. While they have produced well received figures based on The Dinobots, The Insecticons and others, the company has continued to be dogged by controversy over quality control issues, bad business practices and feuds with other third party creators.

FansToys was formed in 2012 when the company released a trailer for the Classics Optimus Prime figure. They later revealed images of their highly detailed Masterpiece style Soundwave and Blaster to universal praise. That praise turned out to be a double edged sword as Takara rushed through their own official Masterpiece Soundwave which also got a Western release via Hasbro resulting in FansToys cancelling their projects. FansToys went on to release their first Masterpiece scaled figure, Quakewave, which sold well and ended up going to three production runs and eventually a 2016 re-release which was badly damaged by Takara announcing an official Shockwave.

Their next figure was Scoria, a Masterpiece Slag which suffered with numerous issues as most units had shoulder joints which were far too loose and there were serious issues that prevented some figures from transforming properly.

Soar had a misprint on its box which referred to it as a Dinobot, a term trademarked by Hasbro resulting in the box being stickered.

When Sever was announced, accusations of design theft were levelled at them by a designer who was working with Gigapower, another third party company looking to release their own Dinobots albeit larger ones than FansToys. FansToys responded by revealing that Gigapower were also the company Cloud 9 and claimed that they had hired away Gigapower’s designer meaning that the Gigapower Dinobots would never be a complete set and also accusing Cloud 9 of stealing Quakewave’s transformation. The irony that FansToys are stealing Hasbro and Takara’s designs and transformations wasn’t lost on collectors.

In Europe, FansToys broke an exclusivity agreement with their distributor in order to supply another store directly as part of their agreement with third party company KFC who own one of the workshops that FansToys use for manufacturing and global distribution of their product.

Due to complaints about the headsculpts on their Dinobot figures, replacement head shots were announced but they were packed in with the most expensive Iron Dibot, Grinder, and weren’t available separately.

As the Iron Dibot line continued fans became unhappy that FansToys hadn’t used matching gold chrome resulting in each figure not being uniform with the others. Also Scoria begun to look dated so FansToys started a new company called Perfect Fusion and announced a new version of the character – a bizarre move as starting a new company to sell the same toy to the same buyers would have been a smart move, but it wasn’t quite as smart to tell everyone that they were the same company.

Grinder was criticised for not having a particularly accurate dinosaur mode head resulting in FansToys announcing a replacement that had to be purchased separately. This replacement was the subject of legal action in the U.K. that prevented it from being sold here.

Recently a fake Cease and Desist letter was published online purporting to be from Hasbro to FansToys banning the sale of their Giganticus figure which resulted in some panic buying as collectors thought the figure would become rare. The letter turned out to be a genuine letter that had been sent to another company regarding Monopoly but had then been heavily edited in Photoshop. As the letter benefited FansToys, some TFW posters felt that FansToys had created the letter themselves in order to boost sales.

This latest controversy has caused FansToys Rouge to once again dominate third party discussions although FansToys haven’t acknowledged their part in the picture. Will their next release also feature drama that helps gain extra publicity and extra sales?