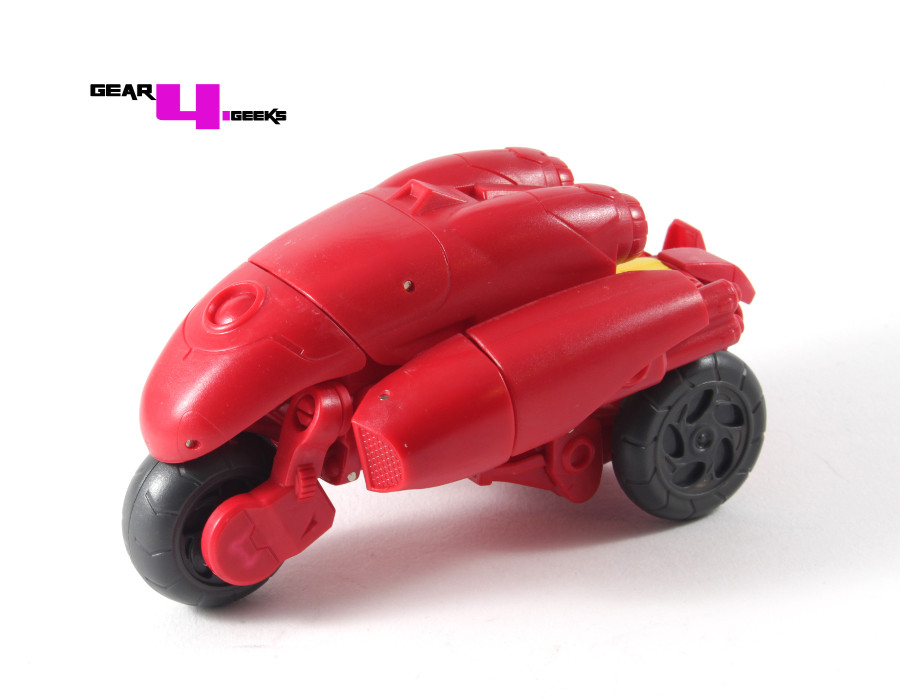 Between 2008 and 2011 Hasbro released Transformers Crossovers which was a line merging Transformers with Marvel characters and later, Transformers with Star Wars characters. The Marvel line focused on major characters with series 1 consisting of The Hulk, Iron Man, Spider-Man and Venom. From there the line became mainly repaints with molds being reused over and over plus there was very little variation in characters. By the time of the line’s cancellation in 2011 there were only toys based on Spider-Man, Venom, Carnage, The Hulk, The Human Torch, Thor, Captain America, War Machine, Ghost Rider and Wolverine but these 10 characters accounted for 27 toys, made from 10 molds, some of which were used 4 times.

One of the interesting releases was a Spider-Man and Iron Man combiner in 2009 which saw the vehicle modes combine but not the robot modes. In 2010 new figures were shown at Toy Fair 2010 but were never released, which included a blue Human Torch, The Thing (a repainted Hulk bulldozer), The Punisher (a repainted Captain America humvee) and an Iron Man/War Machine Combiner.

The picture above is from the Toy Fair 2010 panel where this figure was a little bit overshadowed by the announcement of the deluxe Generations Drift figure and pretty much everything else that was revealed that day.

But wait, someone was excited and it was those people over at Seibertron who later posted test shots of Iron Man from the combining set and of the two versions of Ghost Rider. These were at the time when Hasbro wanted all test shots and prototypes to have their faces/heads damaged so they wouldn’t be of value on the secondary market. These test shots had engineer signatures on the face or maybe they are Hitler moustaches.

This test shot was totally forgotten about as no one cared because the line absolutely sucked and only 3 people noticed when it got cancelled.

7 years later and now I present to you, the missing piece of Transformers history that no one noticed or cared was missing – the unproduced Transformers Crossovers Iron Man.

You can tell that 2010 was the year that the Tron remake was due for release by the way designs in the Transformers line started veering into light cycle territory and Iron Man here is no exception.

In fairness to the Crossovers line, it was probably never going to excel because Transformers, Marvel and Star Wars collectors want to collect a specific line and generally aren’t interested in anything outside that line and especially not non-canon figures. That in itself is somewhat of a shame as there are nice figures which fall through the gaps and Crossovers sort of fall into that.

The unproduced Transformers Crossovers Iron Man here is a good example of that, the bike mode is actually quite clean and a nice design with only the back letting it down thanks to the visible fists and uncovered thighs, which is necessitated presumably by the combining gimmick.

Again, from the front we have a nice solid design. Bike Transformers are often fairly bad so making Iron Man a tricycle gives extra mass to play with when it comes to the robot mode.

As far as Crossovers figures go, this Iron Man isn’t bad. The fists have very little articulation, only moving inwards slightly but that’s the only real criticism here. The head is a standard swivel and there are no ankle tilts but the figure is still fairly poseable especially considering where the main line was back in 2010.

Even the back of the figure is pretty clean with no kibble and it has to be said that it’s a damn site nicer than anyone would reasonably expect.

If we can ignore those huge forearm panels, we actually have a decent looking figure here, especially within the context of the Crossovers line where many of the figures were truly awful.

Iron Man can get some poses on the go although he is a little limited but not nearly as limited as some of 2010’s other releases like Drift for example.

Due to the lack of a ball jointed head the figure can’t do the Iron Man landing pose but it’s pretty close to it which is impressive considering how few figures can actually get anywhere near it.

While the forearm panels are somewhat ugly the do provide Iron Man with double barrelled lasers on each arm which make him a little more badass.

It’s a shame this figure never made it to market as it’s actually a very nice figure and the War Machine it was scheduled to come with looked decent too. It feels like we missed out on a set that had some potential while we instead got some real turkeys.

And yes he can almost do the run.

I hope you enjoyed this look at the unproduced Transformers Crossovers Iron Man figure, please do leave comments and feel free to share via Facebook, Twitter, smoke signals, carrier pigeon.