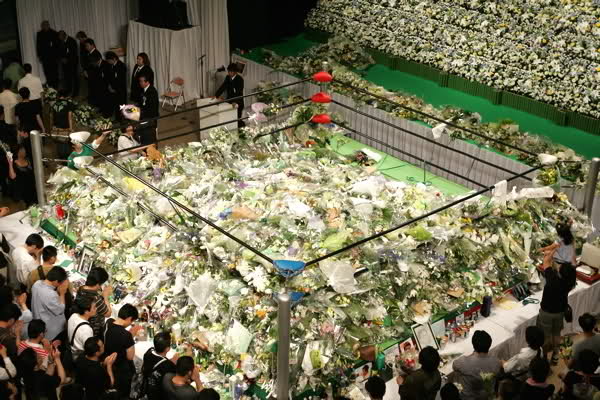 Gear4Geeks looks at the 7 saddest wrestling pictures and the stories behind them.

The 7 Saddest Wrestling Pictures Ever

We’ve deliberately not included pictures of wrestlers who died in the ring like the pictures of Owen Hart, Misawa, Perro Aguayo Jr or the more grisly shots from open casket funerals like those of Bruiser Brody or Yokozuna.

Mitsuharu Misawa was one of the greatest professional wrestlers of all time and his sudden death in 2009 during a match for Pro Wrestling Noah was a huge shock to the wrestling community especially in Japan. A public memorial ceremony was held for him gathering far more fans than the venue could possibly accommodate with mourners filling the ring with flowers. The image above starts our list of saddest wrestling pictures due to the incredible sight of so many bunches of flowers not only in the ring but the wall behind.

Misawa had debuted in 1981 and had wrestled as the second Tiger Mask from 1984 through to 1990 including challenging for the American AWA and NWA championships along with a time limit draw against Bret Hart in April of 1990. The next month Misawa was unmasked and he continued to wrestle using his real name until his death. Misawa was enormously successful in AWJP, even becoming president of the company following the death of Giant Baba, but disagreements with Baba’s widow led to Misawa leaving to form Pro Wrestling Noah. On June 13th 2009 Misawa took a belly to back suplex from Akitoshi Saito and immediately was non responsive with the cause of death later said to be from a heart attack brought on by his neck being broken by the suplex. Misawa was 47 at the time of his death.

Zack Ryder just couldn’t get a break from WWE and went unused on TV and PPVs for a year between 2010 and 2011 until he started his own YouTube series that led to a surge in his popularity and some high profile matches. Unfortunately by the end of 2012 Ryder was back to being nearly invisible and his only PPV appearance of 2013 was at the Royal Rumble. Ryder can occasionally be spotted watching from the curtain at some of the PPVs throughout 2013 to present. Zack is a perfect example of someone who loves their job, is passionate about wrestling and good at his job but is in the frustrating position of not being used.

5 –  The Wrestler But For Real

Darren Aronofsky‘s 2008 movie The Wrestler was a fictional account of life for a wrestler after fame is over, but wrestling fans knew that for a lot of wrestlers the movie was pretty close to home. In November 2013 a video emerged from a Classic Championship Wrestling show where WWE Hall of Famer Nikolai Volkoff faced off with one of the greatest tag team wrestlers of all time, Bobby Fulton. Unfortunately CCW had been unable to get a ring for the event leaving the 53 year old Fulton and 67 year old Volkoff to improvise in front of a crowd of 30 to 50 people. To Fulton’s credit it was him who inspired the rest of the wrestlers on the card to go through with the event even without a ring and he was heralded as saving the day for the small promotion. This makes the list of saddest wrestling pictures as it shows the grim reality some wrestling veterans face in trying to earn a living after their star has faded.

We seriously considered making this number one on our list of saddest wrestling pictures because the image alone powerfully conveys Michael Cole’s darkest hour. On the September 10th 2012 episode of Raw Jerry Lawler made a rare return to the ring as he tagged with Randy Orton to defeat Dolph Ziggler and CM Punk, after which he returned to his commentary duties. It wasn’t long though until Lawler could be heard retching before the audio was cut with Michael Cole calling the remainder of the ongoing match solo, but what viewers were unaware of was that Lawler had a heart attack and at that time was having CPR performed on him by a WWE trainer. It was decided that after Cole updated the viewers on Lawler’s situation that Raw would continue without commentary and Cole was offered the opportunity to leave the commentary position, but he refused as he felt it should be him giving updates on ‘The King’s’ condition especially if the worst happened. The picture above captures Michael Cole sitting alone on commentary with his head in his hands as he waits to find out if Lawler had died. Thankfully Lawler survived with no ill effects and returned to Raw on November 12th.

For 30 years the 6 foot 7 inch James Harris terrorised wrestling fans as Kamala The Ugandan Giant. Harris had incredible balance and athleticism for a 375 lb man but wasn’t a particularly great wrestler nor interview leading Jerry Lawler and Jerry Jarrett to create the Kamala gimmick for Harris to accentuate his skills while hiding his limitations. Billed as a simple and savage cannibal from Uganda, Harris became hugely successful and had multiple runs in the WWF feuding with Andre the Giant, Hulk Hogan, Jake ‘The Snake’ Roberts and The Undertaker amongst others. Unfortunately Harris never had the easiest of lives as he grew up extremely poor and wasn’t well educated; his son died of AIDS and in 1993 his sister’s partner murdered her and her stepdaughter. In 1992 Harris was diagnosed with diabetes and told by his doctor to give up alcohol, lose weight and to begin dialysis immediately; advice which was ignored. Due to failing health from diabetes Harris retired in 2008 but in 2011 had his left leg amputated and a few months later had to have his right leg also amputated. Harris currently requires an electric wheelchair to get around and relies on disability payments.

There is no doubt as to who the greatest manager in professional wrestler is – Bobby ‘The Brain’ Heenan. From 1974 until 1993 The Brain was always at the top of the card thanks to his incredible ability to cut promos and his understanding of wrestling psychology which saw him interject himself at the exactly right moments during matches. Importantly he knew that his role was to get over the talent he was paired with, rather than putting himself over. When he joined the WWF in 1984 Heenan ended up impressing owner Vince McMahon so much that McMahon made him not only the top manager but also a commentator and host of his TV shows. When Andre The Giant faced Hulk Hogan at The Main Event in 1988 Heenan received a six figure cheque for that one event – the highest a manager has ever received.

Heenan retired in 2000 but was diagnosed with throat cancer in 2002 which led to him losing 56 lbs and his voice changing dramatically. In 2004 ‘The Brain’ was inducted into the WWE Hall of Fame but in 2007 he underwent further cancer surgery removing his jaw and undergoing extensive reconstruction surgery which cost him the ability to speak. Heenan underwent further surgeries in 2009 and 2010 before being treated for tongue cancer in 2013 but also suffered 2 falls that resulted in 2 hip breaks and a broken Pelvis.

Currently Bobby ‘The Brain’ Heenan is only able to speak to a very limited degree and is wheelchair bound as his body is frail from the falls and cancer treatments. He makes occasional convention appearances and clearly his mind is as sharp as it ever was despite his limited ability to communicate.

1 – You Either Die A Hero, Or You Live Long Enough To See Yourself Become The Villain

The end of Wrestlemania XX in 2004 brought a tear to the eye of most wrestling fans as Chris Benoit stood in the ring as the new World Heavyweight Champion alongside his best friend WWE Champion Eddie Guerrero; two men considered to be the two very best wrestlers in the world. The path to the top had been difficult as both men were considered small by WWE’s standards with Kevin Nash referring to them as “vanilla midgets”, a sentiment shared by the management of both WCW and WWE. When Wrestlemania XX ended with the two hugging in the ring joined by Benoit’s family it seemed like a dream come true for the men, their families and for the fans who had long supported them.

On November 13th 2005, 18 months after the iconic photo above, Eddie Guerrero was found dead in his hotel room. Guerrero had been clean for four years but his history of drink and drug abuse led to him having a fatal heart attack in his sleep.

At the Eddie Guerrero memorial show the sight of a visibly distressed Benoit was heartbreaking. During a video segment Benoit talked about his friendship with Eddie and broke down in tears, a sight completely at odds with his tough persona which conveyed how deeply upset he was. This picture alone is one of the saddest wrestling pictures. Benoit begun to drink heavily (he had been teetotal), allegedly took a lot of pills and kept a diary in which he wrote regular messages to Eddie, messages which later were found to be increasingly disturbing. Friends and family of Benoit noted his behaviour becoming increasingly paranoid and erratic as he became convinced that his family could be abducted or attacked. Meanwhile, backstage Benoit’s bullying of other talent became far worse.

On June 11th 2007 Chris Benoit was drafted to WWE’s ECW show which Benoit knew was a huge demotion for him, even though he’d been promised an ECW World Championship reign which would begin at the June 24th Vengeance PPV and a job for life as a trainer. Benoit didn’t appear at Vengeance, missing the house shows prior and the event itself due to his wife Nancy and son Daniel being ill and vomiting blood. For the incredibly dedicated Benoit, everyone knew his family must be seriously ill for him to miss a PPV. On June 25th at WWE’s request police went to Benoit’s home to check on him and his family but found him dead. Before killing himself Chris Benoit had also brutally murdered his wife and later his 7 year old son over the space of the weekend.

March 14th 2004 saw Chris Benoit and Eddie Guerrero close Wrestlemania XX as heroes but by June 24th 2007 both were dead with one being remembered as a monster.

1 thought on “The 7 Saddest Wrestling Pictures Ever”