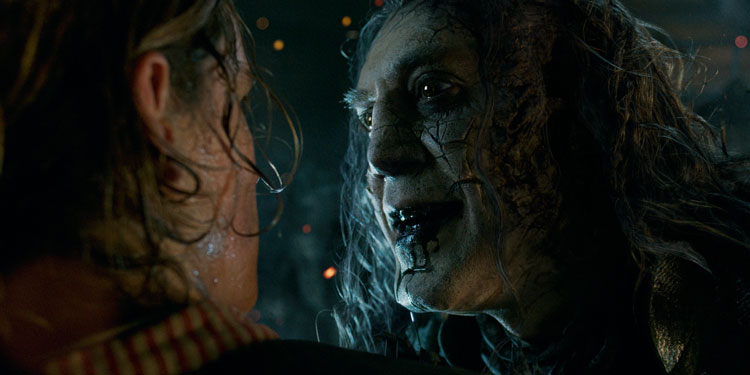 Pirates of the Caribbean: Salazar’s Revenge is a fun film with dubious writing.

Warning me lad, thar be spoilers ahead for Pirates of the Caribbean: Salazar’s Revenge.

Pirates of the Caribbean: Salazar’s Revenge is a fun adventure film but the series is getting a little old and unoriginal now with the ghost crew of the movie being a rehash of Barbossa‘s crew in Pirates of the Caribbean: Curse of the Black Pearl and Jack Sparrow‘s crew leaving him only to rejoin. The film is worth a watch but expect it to be what it is – a cash in sequel with lots of CGI, lots of comedy but 2 dimensional characters and a plot that makes virtually no sense.

For the purpose of this article there won’t be any nitpicking because Pirates of the Caribbean: Salazar’s Revenge is a fantasy film and we have to make allowances for some of the science involved like the young Henry Turner being able to hold his breath for an incredibly long time at the beginning of the film and The Flying Dutchman rising to the surface so quickly it would cause decompression sickness AKA the bends. What we’re looking at here are 3 big plot holes that we’re surprised the writers didn’t pick up on. We’re also going to ignore the origin of Jack’s compass which is explained in a totally different way this time around as Jack could simply have been lying when he told the story of how he came to own it originally.

Admittedly it’s been 10 years since Pirates of the Caribbean: At World’s End was released, memories may be hazy and we need a refresher of what happened. In Pirates of the Caribbean: Dead Man’s Chest we learn that to serve on The Flying Dutchman a person must be dead or near enough death to be considered dead. The Captain’s heart is removed after death and placed into the Dead Man’s Chest which grants him and his crew immortality. The only way to kill the Captain is to open the chest and destroy the heart, whoever does so will become immortal themselves and take the Captain’s place.

When Will is mortally injured in the final battle during Pirates of the Caribbean: At World’s End he is helped to stab Davy Jones‘ heart then succumbs to his injuries. Once his heart is removed and placed in the chest he resurrects and takes control of The Flying Dutchman. When Poseiden’s Trident is used to break all curses at sea Will’s duty to stay aboard the Dutchman and ferry souls to the afterlife and his immortality are ended. However, shouldn’t he still be dead? His heart isn’t in his body and even if that is counted as part of the curse then he still died of his wounds.

Likewise, when Davy Jones is teased as being alive in the post credits scene in Pirates of the Caribbean: Salazar’s Revenge, he A. shouldn’t be alive and B. Even if the curse being broken restores the person to how they were pre-death then he shouldn’t be a weird fish mutant anymore as he only became a monster because he refused to do his duty in ferrying the dead. Speaking of which, Will shouldn’t have barnacles on his face as there’s no reason for him to mutate unless he too wasn’t doing his job.

Geoffrey Rush‘s Hector Barbossa is once again a highlight of the film but there’s some poor writing when it comes to his character. Throughout the film we are told that the diary was left to Carina Smyth by her father including the drawing on the front and the gem stone but he was unable to decipher the map as no man can read it, a rehashed technicality from Lord of the Rings: Return of the King.

When Barbossa needs to find Jack Sparrow he asks the witch Sansha where to find the trident as he doesn’t know the location. It’s revealed later that Barbossa knows about stars and constellations later in his discussion with Carina when the audience discovers that he is her father and we later find that he has the map tattooed on his arm.

For this to make sense we have to believe that Barbossa, who has a good knowledge of astronomy and a tattoo of the map, never made the connection in the 20 odd years between giving his daughter up and when the movie takes place plus the time he possessed the diary for after he ransacked the Italian ship and took the diary from Galileo Galilei. When they finally reach the island Barbossa tells Carina to attach the gem to the main rock, activating the divide but how did he know that if he’d not been there before? Admittedly he may have been lightning fast in deducing that the ruby was the key but then this is also the guy who couldn’t figure out that his tattoo was of the same stars he’s been using to navigate. Tying the backstory of Carina’s father to Barbossa was a fairly obvious reveal but a bit more thought could have gone into it.

Armando Salazar is the villain of Pirates of the Caribbean: Salazar’s Revenge but is he really? The big reveal is that he wasn’t a pirate, he was a Spanish Royal Navy Capitan who hunted pirates to make the sea safe which makes him pretty heroic. While he’s cursed to stay in the Devil’s Triangle, he kills the crew of The Monarch at the beginning of the film which we know is an English ship. The Pirates films are set during the Anglo-Spanish war so Salazar kills the crew of a country his nation are at war with, likewise when he sinks The Essex. Throughout the rest of the film he’s killing pirates who are the protagonists in the films but in reality are actually villains.

The scenes to establish Salazar as a bad guy are the shooting of the surrendering pirates who would have been executed anyway, the sinking of two enemy ships, killing pirates and his possession of Henry Turner, who by this time has committed a number of criminal offences himself and is an English sailor. As we’ve seen in previous instalments, there really aren’t noble characters in these movies so Salazar by default may be the closest even though as a ghost he looks like a goth Frankie Howerd.

What did you think of Pirates of the Caribbean: Salazar’s Revenge? Do you agree with us on the plot holes? Let us know in the comments!

2 thoughts on “Pirates of the Caribbean: Salazar’s Revenge Plot Holes”