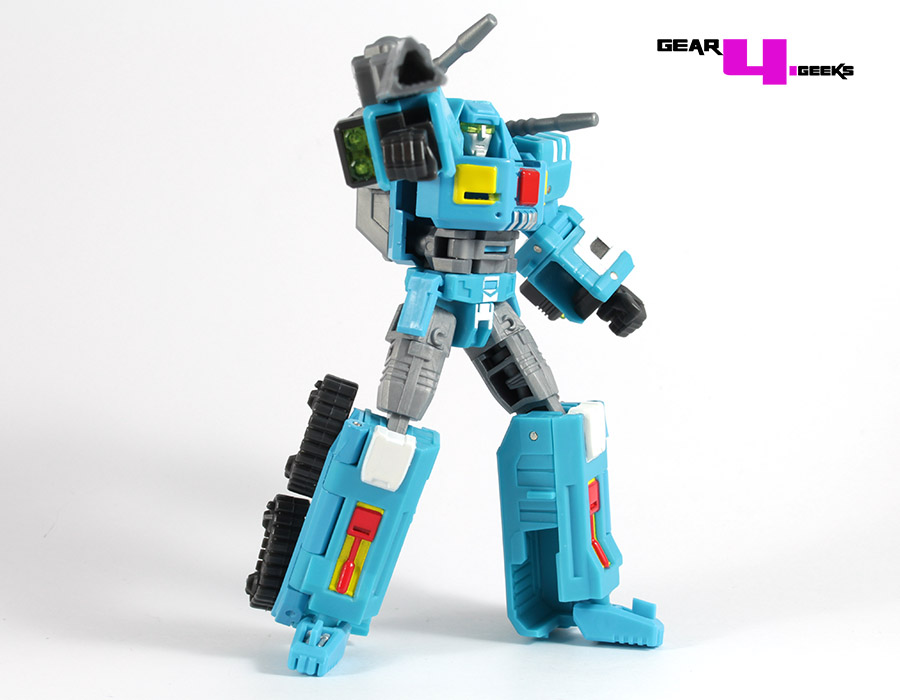 Last time I reviewed Eagle Robo and this time it’s Battle Robo, also known as the Gobot Tank. For many of us older Transformers and robot collectors, Tank was the first transforming robot we’d seen because he seemed to be the poster boy for Robo Machine when it was released in Europe, before it was rebranded as Gobots.

As with Action Toys’ other Machine Robo figures, Battle Robo is an updated version of the original figure so remains close to the original aesthetic while adding in more articulation.

As with Eagle Robo, Battle Robo is very articulated, sturdy and there feels like there’s very little risk of breaking him, which is a good thing when you have fat sausage fingers like me.

One thing strikes me as odd and that’s Action Toys’ choice of blue. The original Machine Robo Battle Robo was dark blue, as was the Robo Machine and Gobot releases and even the cartoon model (voiced by Peter Cullen who also voices Optimus Prime). The only instance of this almost teal colour being used was on an oversized bootleg which you can see on Super Toy Archive.

The tank mode is fairly faithful to the original too but a few changes have been made. The tank tracks are now 2 sets on each side instead of 1 but are still upside down like they were on the MR/RM/Gobot which is a lovely touch. The plug in dual gun has been replaced with better proportioned weapons that flip out and as mentioned above, the tank barrels are now a bit beefier and raise up. The conversion between one mode and the other has the same concept as the original which literally just folded at the waist but it’s been made more intricate and is very surprising as it doesn’t change in the way you presume it will.

Last time I briefly mentioned the base included with the figure. These bases can be configured individually or can be joined together if you have a few of the figures, plus they can be used as flight stands!

I think it’s safe to say that my only gripe about the figure is that the colour is lighter than I”d have liked and if that’s the only concern, then you know the figure is solid.