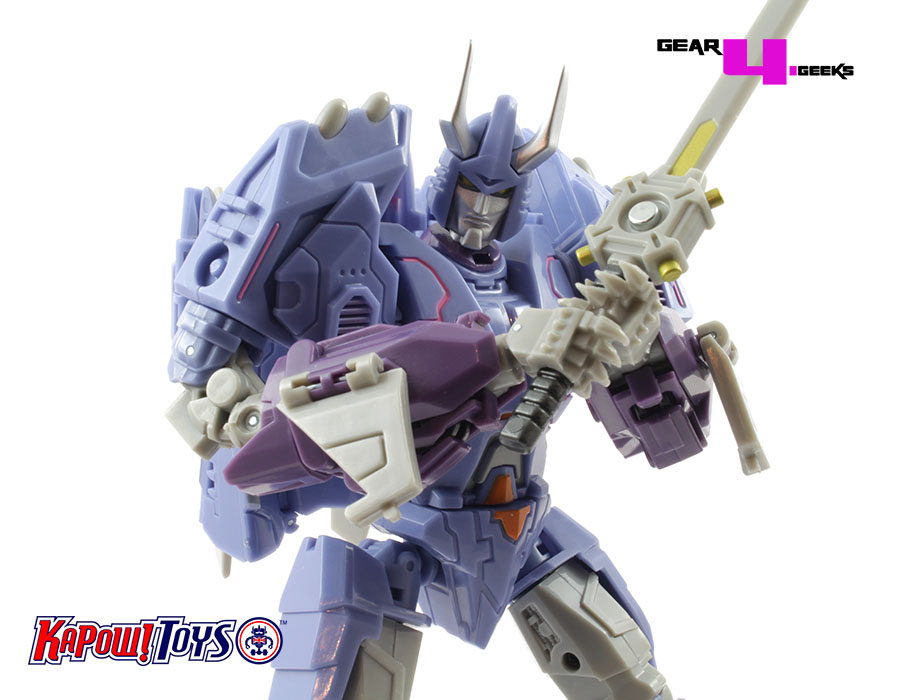 Starscream’s Toast gets his mitts on MMC Boreas to review Mastermind Creations’ homage to Transformers’ Cyclonus.

Boreas was the ancient Greek God of the cold Northern wind which is an appropriate name for Mastermind Creations‘ Boreas – their homage to the cold calculating warrior that is Cyclonus.

With MMC’s releases scaled for the Transformers main line, I was somewhat surprised by the size of the box as I’d expected something far smaller.

The box features the familiar U-Nem artwork and MMC’s Reformatted branding although Boreas is darker on the box than the figure inside, a hint of something to come perhaps?

Out of the box, the Voyager sized figure is impressive! While the mold has been used previously for Jaegertron and Anubis, this is my first time experiencing it and it’s a decent, solid figure with the head capturing the look of IDW’s version of Cyclonus, making me regret having sold Maketoys‘ Rear-End (Tailgate). Sigh.

The rear of the figure was very surprising as I’d expected to find a jet loosely hanging off the back like every other Cyclonus figure, but no, instead we have a neatly folded up backpack with some obvious wings but no other kibble, which is exactly how Cyclonus should look.

Boreas comes with the Great Sword that IDW’s Cyclonus carries which is the perfect size as usually, Transformer swords are way out of proportion. Unfortunately Boreas doesn’t come with a gun which is a bit of an odd one. After a little posing he’s looking good although he does have those weird knees that don’t allow the legs to fully flatten; he’s constantly got slightly bent legs although it’s not really noticeable unless you look for it.

A lovely feature is that the sword has a magnet in the hit and so can stick to Boreas’ back, meaning he can ‘sheath’ it without needing a physical scabbard.

With a bit more posing, Boreas just is IDW’s Cyclonus like he’s stepped out of the comics. The broken horn, the Ultron-style jaw, the sword, all of it is spot on and I can’t see any IDW fan being unimpressed by this, it’s simply perfect even if the figure should match the shade of purple on his forearms to be fully comic accurate.

The figure has somewhat limited ankle tilts as you can see in the picture above but despite that and the backpack it still poses incredible well without a stand as it isn’t particularly back heavy. The range of motion it has is pretty awesome though the shoulders are pretty big and accordingly there isn’t much outward flex in the arms.

For those who aren’t an IDW fan there is a more traditional head included which suddenly transforms this into the Cyclonus I know and love (sorry IDW fans!). I’m not sure why MMC went with yellow for the eyes instead of red but he still looks menacing and formidable which is what counts.

Boreas with the other head attached is very much a homage to the cartoon Cyclonus with the body colouring and is realistically the Voyager we should have gotten from Hasbro instead of the Deluxe Classics or the terrible Combiner Wars Voyager. Hasbro’s loss is definitely MMC’s gain!

With the help of a flight stand, Boreas can take up some really cool flight poses like some sort of demented Gundam figure which helps him live up to his Air Warrior designation. Speaking of which…

Check that out. Now I’m sure some people will be unhappy with the legs on top preventing Boreas from having that sleek jet fighter appearance but then there were always complaints about the underside of the jet always having a huge amount of robot stuck under it. This seems like a great compromise as the majority of the robot makes up the midsection of the jet so there is no huge undercarriage, plus the leg placement is very reminiscent of both Armada and Animated Starscream. If Mech Ideas were to return I’d not be surprised to see this mold turn up as Dirge, Thrust and Ramjet.

The transformation between robot and jet is very typical of a Cassy Sark design – it is intuitive and easy to do though it has to be undertaken with precision because everything tabs together solidly and perfectly; there’s no margin for error here. Time for the mandatory Transformers review vignette shot.

Below you’ll find a transformation gallery along with more pictures of this awesome figure. MMC have really nailed Cyclonus and it’s strangely become a favourite when I hadn’t expected much from it.

As you can see, the cons of this figure are all small nitpicks which realistically are not even close to being dealbreakers. Sure MMC could have included some extra parts but does anyone want to pay more to try and keep all the nitpickers happy? Besides, Nonnef, KFC, Beelzeboss or someone will probably produce the add on parts as a separate kit for those who want them. There’s no doubt that this is the best rendition of Cyclonus that’s been released to date and there’s absolutely no close competition for the crown.

Many thanks to Kapow Toys for their speedy despatch of Boreas, you can order your own from them here.