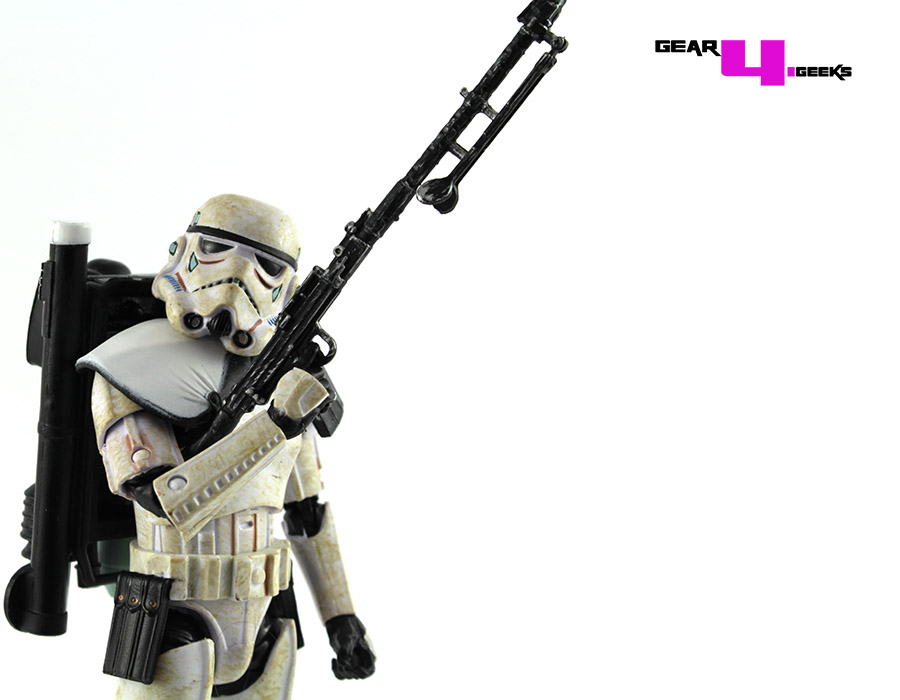 Imperial Sandtroopers carry out the will of the Emperor in the harsh, arid environments of the galaxy’s desert worlds.

Repaints are always going to happen in the toy industry as helps recover the cost of molds and the design process and I have no issue with them provided they serve a purpose. The Sandtrooper Sergeant is an example of a lazy cash in as the figure is identical to the Sandtrooper that was released in July 2013 except the shoulder pauldron is white instead of orange denoting a rank of Sergeant instead of Squad Leader, and the weathering is very slightly different.

The figure comes with the massive backpack that Santroopers wear which unfortunately makes the figure very back heavy and nearly impossible to pose without a stand. I dislike taking shots and digitally removing a stand as it is a cheat so this slightly leaned forward pose is how the figure looks posed without one.

The Sandtrooper Sergeant comes with the three weapons that the original came with – a BlasTech E-11 Blaster Rifle, a BlasTech DLT-19 Heavy Blaster Rifle (the longer thin rifle) and a BlasTech T-21 Light Repeating Blaster (the rifle with the thick barrel). I do like the fact that they included all three so if you army build you can change the weapons up as the troops in the movie all use one of the three.

This is easily the weakest of the 4 repaints in the Imperial Forces boxset which is pretty astounding considering Lieutenant Oxixo is lame and a total missed opportunity. I guess this figure is useful for army building as the original Sandtrooper isn’t easy to find but it’s pretty likely that most collectors would keep R2-Q5 and the Crimson Stormtrooper then ditch this figure and Oxixo.