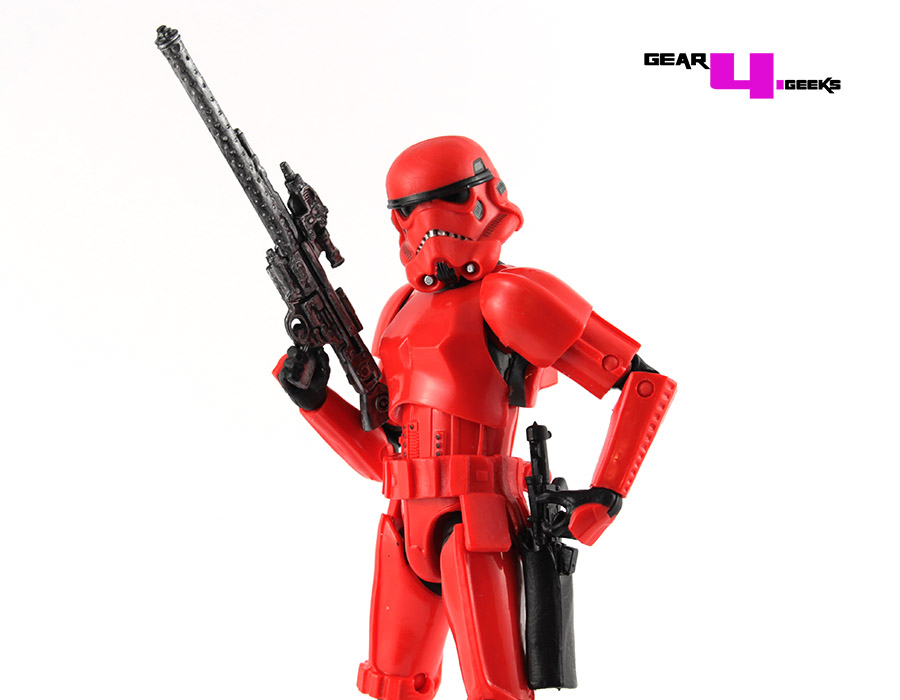 From the Entertainment Earth Imperial Forces 4 pack comes the Crimson Stormtrooper in his red armour. Check out our gallery and mini review.

Specially trained for operations in the extreme temperatures of volcanic areas, these crimson-clad Stormtroopers stay cool in the heat of battle.

The Crimson Stormtrooper is arguably the nicest of the 4 repaints that make up the Entertainment Earth Imperial Forces 4 pack thanks to the very striking red armour which makes it immediately stand out. Plus Stormtroopers are cool.

The Crimson Stormtrooper is a straight repaint of the Star Wars Black Series 2013 #09 Stormtrooper and comes with the same accessories as the original release. The back story is a bit unclear as it seems that this chap is a Magma Stormtrooper judging by his armour and bio, so the new name may just be an error on Hasbro’s part or a renaming but after the mess up with Leiutenant Oxixo it’s hard to know for sure.

The Magma Stromtroopers were deployed in volcanic regions or planets like Mustafar and Sullust but as they are expanded universe characters they may no longer exist after Disney wiped the slate clean. Add to the confusion that red Stormtroopers actually first appeared as Royal Guards to Lumiya back in 2001 as part of Wizard’s of the Coast Star Wars Gamer magazine which was also canon but probably isn’t now.

Existential crisis aside this figure is worth adding to a collection. The red/black contrast is always a very striking visual (see Darth Maul) and works especially well here, plus there are plenty of Stormtrooper variants so one more can’t hurt.

The figure has plenty of articulation although some of it is limited by the amour, especially the hips, which means crouched poses aren’t going to happen. However, all the usual poses you’d want from a Stormtrooper are easily achievable and the blaster holster really adds something extra to the figure.

Unfortunately there are small spots of paints here and there along with slight mould defects which are no big deal if you are a casual collector but those who are obsessive about perfection won’t be happy. Then again, if someone is obsessed with perfection then why collect a low end line when there are better options like the SH Figuarts range?

For those who are fine about a figure being a mass produced toy the Crimson Stormtrooper is pretty awesome but the minor imperfections will make some sweat. With Figuarts unlikely to produce one for a very long time, if ever, this may be your only hope.

Back to Star Wars 6″ Black Series