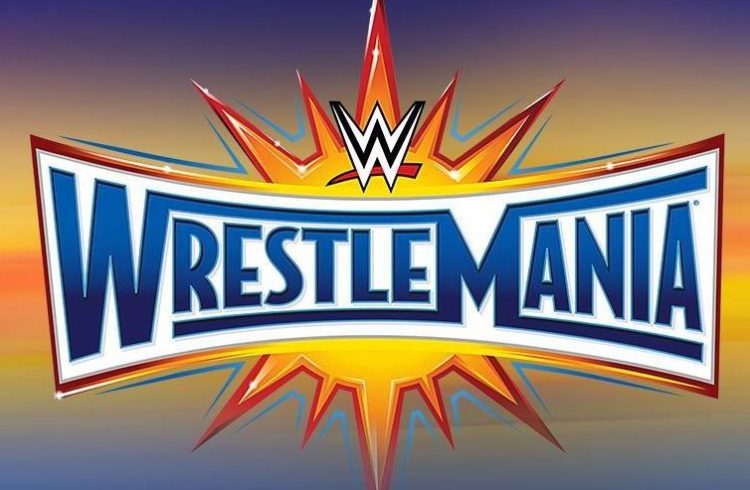 Fast but horrible German Suplex on Aries looked like it may have injured him but in typical Cruiserweight fashion it was very quickly no sold.

Last minute line-up change took out 7 wrestlers and added in another 2 then added them back in. Early story is Braun Strowman and Big Show clearing house til Strowman eliminates Show and then everyone else eliminates Strowman. Underwhelming supposedly last Wrestlemania appearance for Show.  NFL player Rob Gronkowski gets involved after being taunted by Jinder Mahal, though someone obviously didn’t tell the security that Gronowski was part of the show.

Squashed by Lesnar last year, pre show this year, Ambrose has fallen in a big way. After the fan outrage over the Smackdown Women’s Championship match being moved to the pre show, it got moved back so Ambrose v Crobin gets bumped from the main card. The comment of “The Intercontinental Championship is important cause it looks so good” from Renee Young wasn’t a sterling moment.

Tinashe opens the show with the national anthem.

The New Day come out in Final Fantasy inspired outfits to welcome us to Wrestlemania.

20 minutes in to Wrestlemania 33 and we get our first bit of wrestling in the form of a big stunt-fest as you’d expect from a Shane O’Mac match. AJ Styles isn’t what he used to be but he’s settled into the ‘WWE style’ and is easily one of their top guys.

Jericho wearing his purple seizure inducing outfit. The ramp is so long that I’m already wishing that they’d oil it up and let wrestlers bobsled to the ring as some entrances are going to be longer than Goldberg matches at this rate. Beautiful moment as Owens breaks a pin with one finger on the rope. Following McMahon v Styles would be a nightmare for most wrestlers but Owens and Jericho upped the ante.

Logical storytelling as the three women gang up on Jax and eliminate her first, Flair eliminates banks bringing it to Bayley v Flair. Bayley retains after the Macho Man elbow.

I really hate having the champion coming out first but Bayley gets the moment she deserves with the big win on the 30th anniversary of Macho/Steamboat’s 5 star classic.

The Hall of Fame 2017 inductees are introduced to the crowd. Huuuuuuuuge pop for Kurt Angle.

The New Day return to add another team to the mix – The Hardys! No broken gimmick here though. Winners and new WWE Tag Team Champions The Hardy Boyz!

John Cena and Nikki Bella v The Miz and Maryse

Cena and Bella win with tandem AA and Rack Attacks. Afterwards Cena proposes to Nikki who accepts and surprisingly the crowd are respectful and don’t boo Cena for once.

Fairly subtle entrance this year for Triple H at Wrestlemania 33 as he drives a motorbike out escorted by police outriders. Story of the match is the injured knee and the two men duelling with their identical finishers.

Stephen Marley and Pitbull perform to boos. They are joined by Lunchmoney Lewis and Flo Rida.

Champion comes out first again and the crowd seem really flat after the rap performance. A few minutes in and Wyatt wakes the crowd up by lighting the ring up with a projection of crawling maggots but fans are definitely burned out.

Goldberg (c) v Brock Lesnar for the WWE Universal Championship
Lesnar is the new champ after ten German Suplexes and an F5.

Beautiful hearing Bobby Heenan’s voice again during the Goldberg medley. Definitely a good move putting on Reigns/Undertaker last, especially if it’ll be Taker’s swansong. Boos for Goldberg from the crowd. Lesnar takes 4 spears and a jackhammer before leapfrogging a 5th spear and squashing Goldberg. Short match but both men were breathing so hard it is a wonder the first 3 rows didn’t pass out from oxygen deprivation.

Bit sickening having JBL on commentary while the infinitely better Mauro Ranallo is sat at home due to JBL’s bullying. Mickie James looks like she’s stolen Tatanka’s wardrobe and it’s a hell of a success story for James Elsworth being at Wrestlemania 33.

The Undertaker v Roman Reigns
Roman Reigns wins with a number of spears.

Great hearing Jim Ross on commentary but it was a bad move by WWE as it reminded everyone how terrible the current announcers are. Reigns booked as a total heel here. After the match Undertaker puts the coat and hat back on to a standing ovation from the crowd. Taker takes off his gloves, coat and hat and places them on the mat before leaving the ring for presumably the last time. As he reaches the halfway mark he raises his fist for a lightning crash then the lights go out to end Wrestlemania 33.

WWE must actually be concerned about the Anthem claim to the Broken Hardy gimmick as Jeff Hardy didn’t have the eye lens in and they returned to their old music.

Chris Jericho is the only man to defend both World titles, the US championship and Intercontinental championship at Wrestlemania.

No appearance by The Rock, thankfully.

The Hardyz faced Bullet Club members 2 nights in a row for 3 different championships, both in ladder matches. This is also the only time the Hardyz have won as a team at Wrestlemania and the only victory Jeff Hardy has had at WM.

During the pre show some fans dressed as wrestling legends entertained the crowd with their own match. You can see some footage on Twitter.

The stage caught fire while The Undertaker was making his exit.

Tom Phillips becomes only the 5th play by play announcer to call a Wrestlemania with Vince McMahon, Gorilla Monsoon, Jim Ross, & Michael Cole being the other 4.

Undertaker now holds the record for most Wrestlemania appearances in a row with 17.