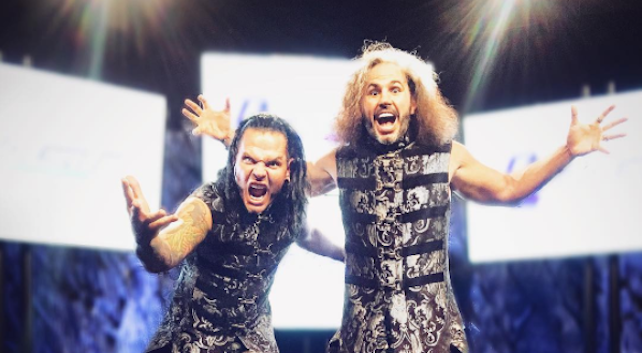 Will we see the Hardys at Wrestlemania?

As we reported on Tuesday, the Hardys heading to WWE is a done deal once their deal with Ring of Honor expires but it seems that RoH and WWE have come to terms on allowing the Hardys to appear sooner. RoH won’t allow the Hardys to use the Broken gimmick due to cease and desist letters from Impact Wrestling’s lawyers but they are expected to appear on the RoH PPV the night before Wrestlemania. The Hardys will be in Orlando on Wrestlemania morning for their tailgate party that they announced when they left Impact Wrestling last month. It’s possible that the Hardys could debut during Wrestlemania’s tag team Championship match especially as it has now been changed to a ladder match; The Hardys’ speciality, or they could arrive on Raw the night after which is when talents often make their debut. Additionally The Hardys have released a new video below of them deleting and reincarnating the TNA Tag Team Titles.

Mauro Ranallo has missed 3 weeks of Smackdown due to ongoing battles with depression, but it seems that the most recent bout has been brought on by JBL being his usual obnoxious, bullying self. JBL’s constant on air jabs at Ranallo are said to have been causing issues but when Ranallo won the Wrestling Observer Newsletter’s Announcer of the Year award, JBL took it very personally as he didn’t make the top ten. On the WWE Network ‘Bring it to the Table’ show JBL expressed his disdain for Ranallo and this apparently led to even further backstage problems between the two. JBL also took a shot at Kevin Kelly being on the list when he’s actually very highly regarded in the industry. When Ranallo missed Smackdown tapings, JBL further commented on Twitter deriding him. WWE are now in a position were the company have a very public anti-bullying policy but JBL’s bullying has been brought into public light by Ranallo’s close friends and former MMA fighters Frank Shamrock and Bas Rutten. Rutten has also said on Twitter that he’s been tempted to confront JBL and see how brave he is in person. Rutten is a former UFC Heavyweight Champion and was undefeated there with 21 wins and 1 draw so a fight between him and JBL would be shorter than the one where Joey Styles knocked out JBL.

On Edge and Christian‘s new podcast (E&C Pod Of Awesomeness) Goldberg talked about being miserable in his current WWE run and is only doing it because his family enjoy him being with WWE so much.

The Wrestlemania XXXIII line up is now seemingly finalised:

Currently not booked for Wrestlemania from the main Raw and Smackdown rosters:

Can we expect Harper to interfere in the Wyatt/Orton match with Samoa Joe perhaps interfering in Triple H/Seth Rollins? With The Rock rumoured to appear, will it be James Ellsworth that he squashes this year?