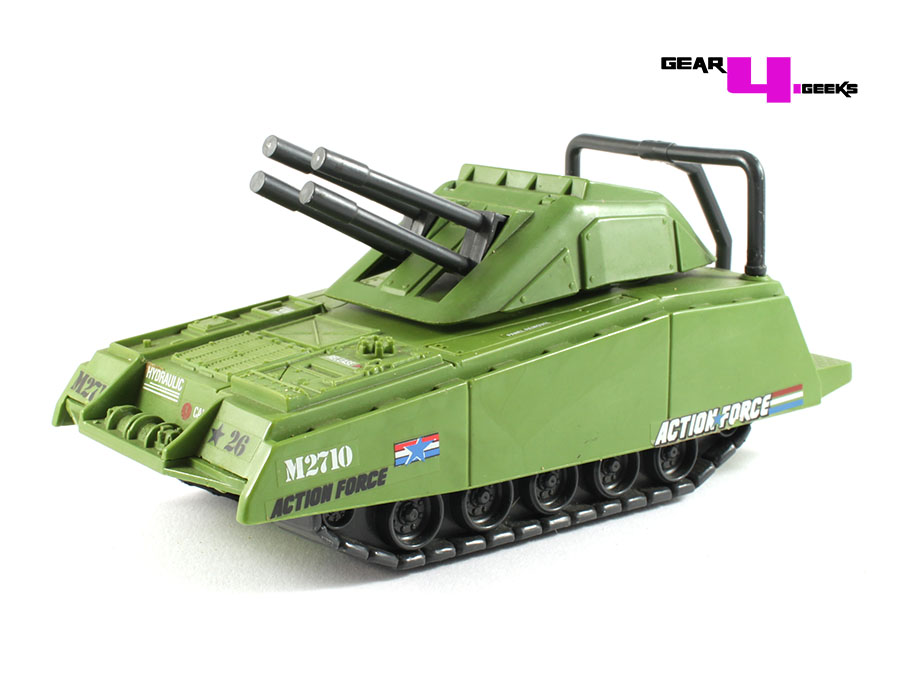 Starscream’s Toast takes a look at the Action Force Armadillo.

Released in 1985 as part of Hasbro’s GI Joe line, the Armadillo mini tank also got a UK release in the same year. The US version had ‘America’ labels and US flags while the Canadian release had ‘Canada’ and Canadian flag decals while the UK version had ‘Action Force’ and the Action Force flag (the US red, white and blue lines with a blue star). Weirdly the M2710 decals stayed in all releases despite the ‘M’ prefix denoting a standard version of an American military vehicle.

While the Armadillo is described on the back of the box as a mini-tank, it’s fair to say that it is actually closer to being a Self Propelled Anti-Aircraft Gun (SPAAG) as these are the only real world tanks that have quad barrels, or indeed multiple barrels. However the screen on the inside of the turret is more indicative of artillery.

The vehicle has room for 3 figures – one in the turret and two standing on the back, although the foot pegs don’t fit all GI Joe & Action Force figures. Thanks to 4 low set wheels in the centre of the underneath panel, the Armadillo can roll on flat surfaces without obviously looking like it has wheels.

The Armadillo was originally released with an RRP of $2.99 which was a really great price for something this well designed. The Armadillo would get repaints in 2006 with a dirty desert camo, 2008 in an olive drab with side attachments and a heavily retooled version in 1989 which removed the quad barrels at the front and added 6 rocket launchers mounted on pylons attached to the rear of the turret. The Action Force Armadillo also popped up in somewhere rather unlikely…

In the February 1989 issue of Games Workshop’s White Dwarf magazine, a repainted Armadillo appeared in a pictorial about modifying vehicles for Warhammer 40,000. The Armadillo is simply described as “converted from a toy tank model”.

Overall the Action Force Armadillo is a wonderful mini tank that would have been an amazing toy for a child in 1985, but still holds up today thanks to it’s nice detailing and pseudo realistic appearance. As White Dwarf illustrated it’s also a great vehicle for customising and could easily be re-purposed as a Star Wars vehicle or as a larger tank for smaller scale figures.

Not only a great piece of history, but 32 years later it’s still well worth owning.

Back to GI Joe & Action Force