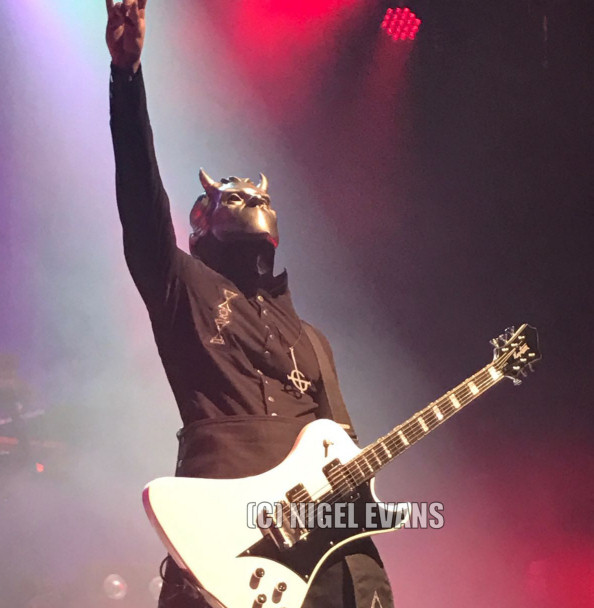 With rumours swirling of band firings and a bad start to the tour, Gear4Geeks headed East to review the Ghost Cardiff Great Hall gig.

For each new album, Swedish band Ghost have ‘fired’ and replaced their frontman Papa Emeritus although each time it was the same person under a redesigned mask and outfit. At first it seemed like part of their smoke and mirrors act when rumours started circulating a month ago that Papa Emeritus III, or at least the man under the mask had fired the entire group of Nameless Ghouls.

As time went on it became apparent that it wasn’t part of the act and many fans started to question their loyalty to a band who now had only one remaining member from previous line-ups.  Omega‘s departure last summer followed by the drastically different sound of single ‘Square Hammer‘ had already disconcerted fans but with the band about to launch their European tour and a US tour in support of Iron Maiden to follow, fans questioning their loyalty wasn’t something that Ghost needed.

Like many others, I felt a little conflicted headed to the Ghost Cardiff Great Hall gig – the Ghouls we’d come to know and love, especially Alpha and Omega wouldn’t be there but then wasn’t the point of Ghost that we weren’t supposed to know who they were and that the band were all essentially anonymous and replaceable? The news that there had been 10 line up changes in Ghost, the vast majority of which the fan base were totally unaware of, had been surprising so while this one was more major should it be seen differently?

Arriving at the Great Hall we were greeted by the merchandise stand which had a large array of Ghost merchandise available and a fair bit for support act Zombi.

Zombi seemed to be largely unknown last night despite having been around since 2002 but it’s safe to say that their appeal is probably limited. The band are heavily influenced by Goblin with their synth heavy instrumental style reminiscent of a John Carpenter movie soundtrack but while they were flawless and turned in a great performance, it largely fell on uninterested ears. Instrumental bands are a hard listen live unless you already know the material and the cult-like Ghost fans were nervously and impatiently waiting for the new line up of the headliners – not really an easy position for any band to be in. To be fair the crowd gave them a decent reaction but I don’t think they managed to convert many fans.

Once the stage had been changed the backing tape that Ghost use pre-intro, ‘Miserere Mei, Deus‘, started and the crowd tension was palpatable. Never before have I experienced a gig where a crowd was so tightly packed as everyone wanted to get as close to the stage as possible. As the tape changed to ‘Masked Ball‘ the crowd began to cheer then Square Hammer kicked things off properly with Papa Emeretis III appearing in a puff of smoke!

Without pause the grinding bass of From the Pinnacle to the Pit was underway then a brief delay before Secular Haze which launched into Con Clavi Con Dio and switched seamlessly into Per Aspera Ad Inferni. On the Gear4Geeks Facebook page we’d promised that we’d try to live stream some songs from the gig and this was the point where we had to stop due to an awful internet connection. You can view what we did stream at the bottom of the page (and next time we know that Facebook’s live stream is designed for vertical videos. Ew) and we’re very grateful to all the Ghost fans, Legion of Ghost members and Ghost Ecuador members who watched along with us (833 views before this article).

Papa then introduced us to the Sisters of Sin before performing Body and Blood then Devil Church leading into Cirice. Trivia: Devil Church was originally a part of Circe but got split into it’s own song as Cirice was too long.

Year Zero followed with the crowd chanting along at their loudest. Probably due to the heat and packed conditions the crowd hasn’t seemed lively until this point but here they exploded. Things calmed down with Spöksonat leading into a giant sing along of He Is before a massive version of Absolution. Mummy Dust saw a keytar solo from one of the Nameless Ghouls with the spectacular rain of Papa money and gold/silver glitter which is an incredibly sight live before we got GhulehZombie Queen and ending on that huge Megadeth riff of Ritual. Papa addresses the crow to let us know there will be one more song, one they always finish with – a song about the female orgasm so we are all to go home and fuck. Monstrance Clock ends the night with the line up of Ghouls and Papa taking a bow in unison before the Ghouls leave Papa to soak in the admiration of the crowd by himself. Afterwards the Dead Can Dance song The Host of Seraphim played while the crowd stood in darkness reflecting on the ritual that had just been conducted.

The Ghouls and Papa all worked very hard to put on an entertaining show, the new Ghouls especially. Papa is still growing as a frontman and his antics during long guitar solos and joining in with cymbal crashes definitely made the crowd laugh, but he still has a way to go to be a top tier entertainer.

The keyboardist (Air) mimed the solo of Mummy Dust which was pretty painful to watch. I’d imagine most people didn’t spot it especially those who had been drinking but it was obvious to any musicians watching. Papa almost certainly mimed one point in the show too.

Botches that had been noted from the Norwich show were gone but the intro to Secular Haze was delayed somewhat and seemed to be a technical glitch or miscue.

Going back over the years the central figure has always been Papa and now is certainly no different. While the split seems acrimonious with one former member being very angry on social media, Ghost carries on and is moving forward with what it was always presumably intended to be – 5 Nameless Ghouls and a focal point front person. Ghost live is a theatrical show and it’s about a performance rather than purely music so the miming, the extensive backing track which layers some of Papa’s vocals along with the ten minute intros and 6 minute outro are simply part of a larger whole, much like seeing a play or theatre performance rather than six people on stage playing music.

It’s easy to pick holes, especially now that the inside workings of the band have been so exposed, but Ghost is about the sum total and not the individual parts, now more than ever whether we like it or not. The Ghost Cardiff show was definitely an impressive showing from a band/individual looking to reassure their audience that the show will go on.

Merchandise pictures and video below are (c) Gear4Geeks, all other pictures are (c) Nigel Evans of Skin City Tattoo Asylum For licensing or reproduction, please contact Gear4Geeks.

Video below turns to the proper direction at the 8 minute mark.