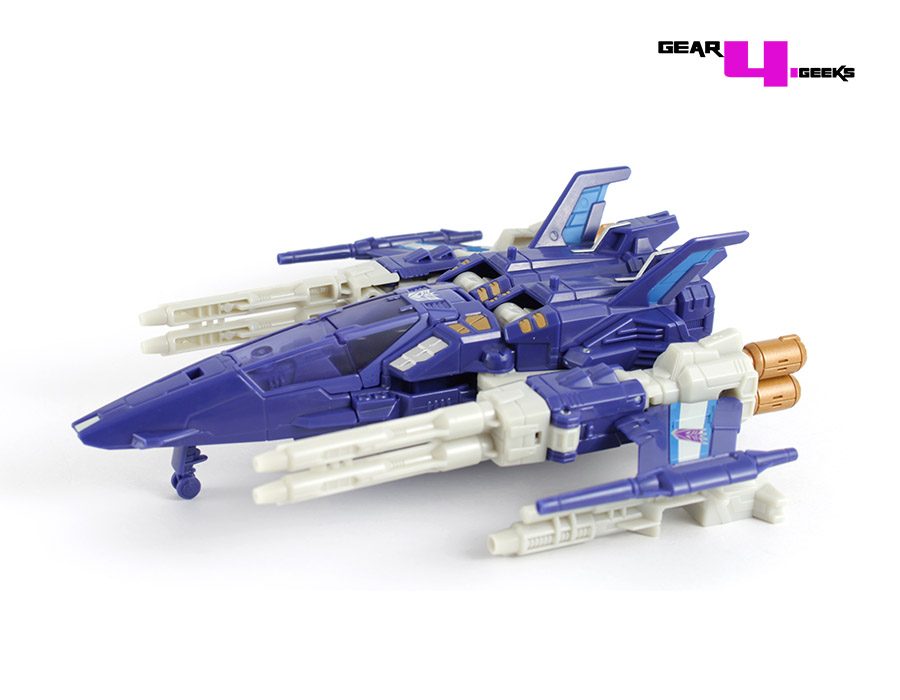 As I said over on the Masterforce Blog, I’m pretty surprised by how much Titans Return has won me over and this is the chap to blame for that – Triggerhappy. I liked the look of a few figures like Chromedome and Highbrow but Triggerhappy was the first one I actually picked up and it was a slippery slope from there.

This is a very nice update of the G1 figure and features a ton of articulation which the original figure could have done with, though this time around Triggerhappy is a Headmaster instead of a Targetmaster.

The backs of the legs and the insides of the forearms are hollow as is usual now with Transformers figures as Hasbro and Takara cut costs.

Articulated, good solid joints and very well balanced too even with that big front of jet on his back.

Even without ankle tilts Triggerhappy can get into a range of poses and is still very sturdy which is no mean feat.

One of the nice features is that the Titan Masters generally feature the same face as the head they turn into and it’s pretty impressive how Hasbro have managed to scale down that detail and keep the figure as being easily recognisable. As with all the Titan Master heads, Blowpipe here is interchangeable with any other deluxe Titan Masters figure.

The thing that makes the Titan Masters figures so wonderful isn’t just the articulation and the updating of iconic G1 figures, it’s that aforementioned interchangeability and here we have Triggerhappy using Apeface as his head.

The jet mode is a straight copy of the original figure and features a cockpit for Blowpipe to sit in. Even when Transformers was non-Earth based in the 80’s the designers still managed to pull off some great alt modes and Triggerhappy’s is right up there.

I do wish that Hasbro has used all the Masters in this range, keeping Targetmasters and Powermasters as deluxe size while Headmasters were in the larger Voyager size but I can’t complain too much as what we have is a great range of figures.

To see the transformation sequence and more pictures please check out the gallery below, you can enlarge each image by clicking on it.