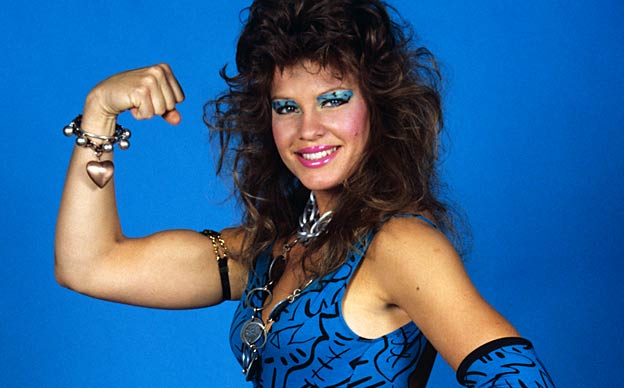 Number 3 in our series of pro wrestling shoots is Wendi Richter v The Spider in the original screwjob!

Wendi Richter is someone who doesn’t get the credit that she deserves for her contribution to the success of the WWF’s rock and wrestling era.  Richter had a solid background,  she had been trained by The Fabulous Moolah,  was a good worker,  had a great look as a young bodybuilder and was hugely over especially during her run with Cindi Lauper.  Richter was so over that she was chosen to end Moolah’s (sort of) 28 year reign as Women’s Champion with her win airing on MTV at The Brawl to End it All, setting a ratings record for the channel.

Richter’s reign was from July 84 until February 85 when she was defeated by Moolah’s protégé Lelani Kai,  regaining the belt a month later at the first ever Wrestlemania.

While everything was going well in front of the camera,  behind the scenes Richter constantly clashed with WWF owner Vince McMahon over money.  On November 25th 1985 McMahon decided enough was enough.

During a title defence against masked newcomer The Spider,  Richter was taken down with a small package and despite kicking out at 1, the referee counted to 3 and rung the bell.  Presuming there was a mistake Richter attempted to carry on the match,  unmasking The Spider and revealing her to be Moolah until the referee stopped her and had Moolah announced as the new champion.

Only Moolah,  McMahon and the referee were in on the screwjob with the commentary team of Gorilla Monsoon and Jesse Ventura being as confused as the fans.  Best of all was Howard Finkel’s announcement of the winner which he pronounced as a question, sounding like Ron Burgundy.

As it sunk in that she’d been screwed over,  Wendi Richter snatched the belt from the referee,  refusing to let go of it until she used it to repeatedly whip Moolah with legitimate blows.  Moolah scrambled to the back leaving an angry Wendi Richter in the ring to throw the title down and mouth angrily at the cameras.  Richter would return to the locker room,  collect her gear and leave the building without changing, ending her career with the WWF.

Moolah held the title for 2 years (minus a week where she dropped and regained it during an Australian tour) before losing to Sherri Martel and retiring.  She was the first woman inducted into the WWF Hall of Fame and would eventually return to the WWF in 1999 in a comedy role with Mac Young.  Moolah died in November 2007 aged 84 but after her death stories came out alleging that she had kept 50% of women’s money and pimped out female wrestlers,  some of whom were underage, while she was a promoter. Allegations of rape,  sexual assault  and more were aimed at her by several former women wrestlers.

Richter went on to wrestle in Puerto Rico and the AWA before leaving wrestling for good.  Eventually she would be inducted into the WWE Hall of Fame in 2010 and make an appearance on Raw in 2012 as part of Heath Slater’s feud with various legends.

In 1997 Bret Hart received the same treatment from Vince McMahon when he refused to drop the title to Shawn Michaels. Strangely Hart never imagined McMahon screwing anyone over…

On to 5 Times Wrestling Got Real (NSFW) #2: Act Yasukawa vs. Yoshiko