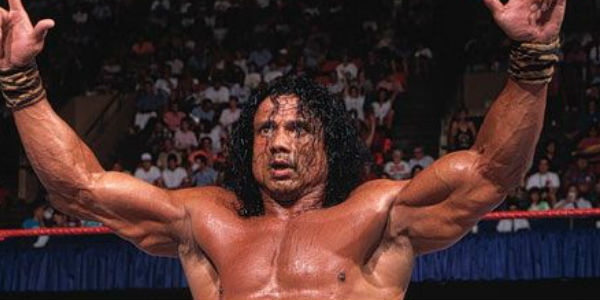 Just one month after his family said he had 6 months to live, WWE Hall of Famer ‘Superfly’ Jimmy Snuka has passed away from stomach cancer. Snuka was a huge star in the WWF during the early 80’s but controversy outside the ring prevented him from being as successful as he could have been.

James Snuka was born on May 18th 1943 in Fiji but his family moved to Hawaii when he was still young. During the 60’s Snuka won several Hawaiian body building championships before becoming a professional wrestler in Hawaiian independents in 1970 then moving onto the NWA Pacific Northwest. There he found success racking up six tag team title reigns and six Heavyweight Championship reigns before signing with the WWF (now WWE) in 1980.

Snuka debuted as a heel and had numerous unsuccessful title shots against WWF World Heavyweight Champion Bob Backlund including a cage match at Madison Square Garden in 1982 where Snuka performed his Superfly Splash from the top of the cage. In 1983 Snuka turned face and defeated his former manager Lou Albano in another Madison Square Garden cage match.

Early in 1983 Snuka’s life outside the ring started to cause problems as he was arrested after an incident at a hotel where he dragged his naked girlfriend Nancy Argentino through the hallways during a violent argument. Claiming that the incident never happened, he pleaded guilty and paid a fine. On May 10th Snuka called 911 for paramedics to attend to an unconscious Argentino who was pronounced dead two hours later. Despite the coroner recording a verdict of homicide and Snuka telling three different version of events, no version of which was consistent with Argentino’s injuries or time of injuries, no charges were filed although the case remained open. In October 1983 Snuka allegedly battered his wife resulting in her hospitalisation but again no charges were filed.

Also in October ’83 Snuka once again performed the splash from the top of the cage in Madison Square Garden, this time on Intercontinental Champion Don Muraco following an unsuccessful title shot. This splash became a milestone in Superfly’s career and is notable for Mick Foley, The Sandman, Tommy Dreamer and Bubba Ray Dudley all being in attendance and being inspired to become wrestlers after seeing the Snuka/Muraco match.

In June 1984 Jimmy Snuka participated in his other most memorable moment when Roddy Piper hit him in the head with a coconut during a Piper’s Pit segment. Their feud was sidelined later in the year when Snuka was forced into drug rehabilitation, presumably for his long standing cocaine usage. After returning he would accompany Hulk Hogan and Mr T to ringside at the first Wrestlemania.

Nancy Argentino’s family successfully sued Snuka and were awarded a civil settlement of half a million dollars but Snuka filed for bankruptcy and never paid a cent. With the WWF cooling on Snuka following the death of Argentino, the drug addiction and the lawsuit, towards the end of the year Snuka headed for New Japan Pro Wrestling despite being featured in the WWF’s Hulk Hogan’s Rock N Wrestling cartoon. He then joined the AWA and worked for both promotions before rejoining the WWF in 1989.

During this time Superfly was used as midcard talent to elevate wrestlers like Rick Rude, Mr Perfect and Ted Dibiase before becoming the first of The Undertaker’s wins in his Wrestlemania streak at Wrestlemania VII. In February 1992 he left the WWF and headed to the independents where he became the first ECW Heavyweight Champion when the company was known as Eastern Championship Wrestling. His first reign was ended by Johnny Hotbody but he retook the belt only to be defeated by old nemesis Don Muraco. Despite appearing at three events for the WWF in 1993, Snuka continued to work the independent scene until his semi retirement.

In 1996 he was inducted into the WWF Hall of Fame and went on to make sporadic appearances for the company including wrestling at Wrestlemania XXV until his last appearance in 2010 when he appeared with his daughter Tamina on WWE’s ‘Old School’ edition of Raw. During this time he also made one off appearances for WCW and TNA wrestling.

in June 2013 Lehigh County District Attorney Jim Martin announced that he was looking into the Argentino case again and in January 2014 it was handed over to a grand jury. On September 1st 2015 Jimmy Snuka was arrested and charged with third degree murder and involuntary manslaughter, charges which would have seen him jailed for 20-40 years and on November 2nd Snuka entered a not guilty plea. Upon his arrest the WWE terminated his Legends contract and removed his biography from the Hall of Fame website. In May 2016 Snuka’s defence team claimed he was not competent to stand trial due to dementia and his failing health, a claim the prosecution countered with footage of a Snuka match from a year earlier. On June 1st Judge Kelly Banach declared Snuka not fit to stand trial and ordered a new hearing for January 3rd 2017 where she dismissed all charges, again deeming Snuka not fit to stand trial.

In the interim, Snuka joined a lawsuit against the WWE for brain injuries sustained during his career but his family announced in December 2016 that he had only 6 months to live. Jimmy Snuka passed away today, January 15th aged 72 from stomach cancer.

Snuka’s high flying style was a clear influence on later Cruiserweights and he was a massive star in the early 80’s but his activities outside the ring always put a blemish on his career and the murder charge hung over him for over 30 years. However, the real tragedy of Snuka’s story is Nancy Argentino who lost her life at 23 and her family who fought to get justice for 32 years but never got it.