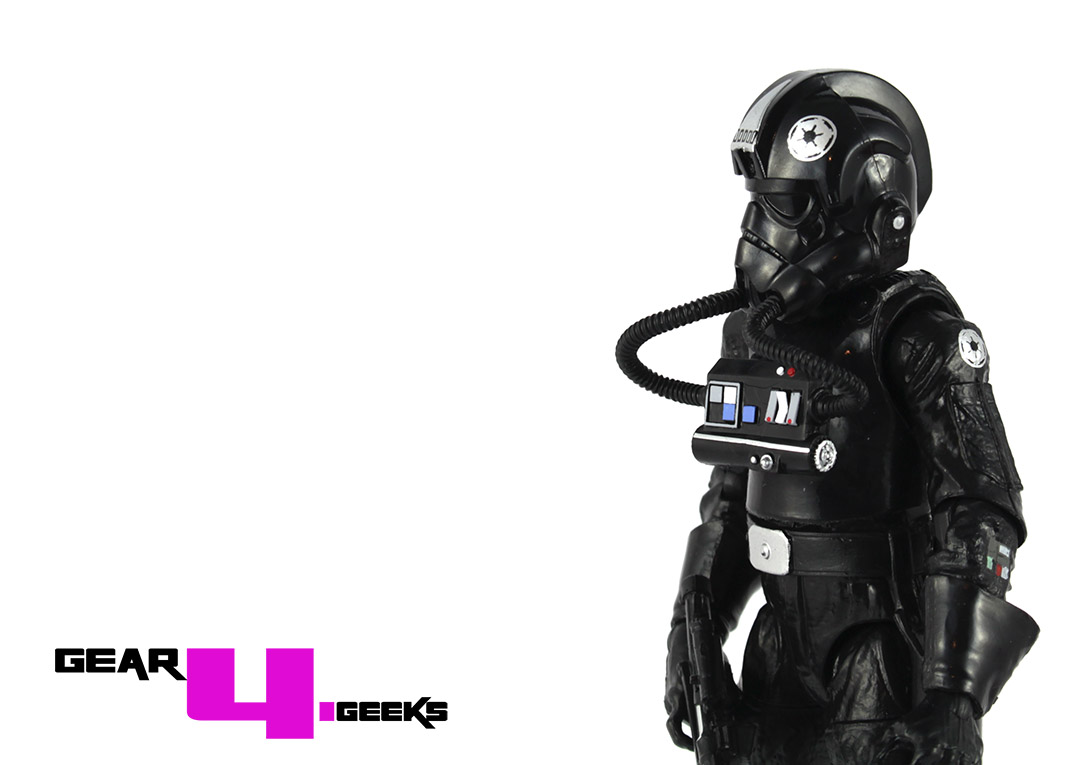 Lieutenant Oxixo is the subject of our second Star Wars Black gallery.

Lt. Oxixo piloted one of the four TIE Fighters shot down while pursuing the Millennium Falcon during its escape from the Death Star before the Battle of Yavin.

Lieutenant Oxixo is a wet dream for those who love to nitpick –  the first ever release of a Lieutenant Oxixo was in the 3 3/4″ series where he was portrayed as being a pilot in Return of the Jedi. This time around his bio has been corrected to establish him as the one pilot we see when the Falcon is pursued by 4 TIE Fighters after escaping the Death Star.

The figure was released as part of the Entertainment Earth exclusive Imperial Forces four pack and is a very slight repaint of 2014’s TIE Fighter Pilot. The only repainting is on the crest of the helmet to give Oxixo the silver triangle and Aurebesh name detailing but this leads us to another mistake.

What’s in a Name?

The character’s name is taken from the name on the helmet in the still from the movie (OXIXO) but Hasbro didn’t apply this and instead gave him 5 squareish boxes. The movie helmet also has a silver grill on the frown and a dark grey chin grill but these have been left off making this a pretty poor effort.

This leads us to the next issue, the character’s name isn’t Oxixo at all as that’s not what it says on his helmet’s nameplate as you can see in the image above reproduced from the incredible Star Wars Helmets website. As West End Games produced the Aurebesh alphabet much later on it renders the few examples in the original trilogy as gibberish in English or the characters obsolete as is the case for the pilot we see on screen…so Oxixo it is.

Naming and paint aside this is a nice army builder figure and like the original TIE Pilot there are plenty of details to love here including the holster which can hold the Blastech E-11 Blaster that comes with the figure. The hoses are nice and flexible but will pop out if the helmet is moved too far.

Unfortunately in an expensive boxset which is completely comprised of repaints, Oxixo comes out as the weak link as there’s very little to set him apart from the original Pilot release, making him dispensable. Most collectors only sought after the Crimson Stormtrooper and R2-Q5 leaving the Sandtrooper and Oxixo fairly unloved and it is easy to see why.

Finally, despite these flaws it’s very hard to deny how photogenic he is…

Lieutenant Oxixo with the other figures from the Imperial Forces box set – R2-Q5, Sandtrooper Sergeant and Crimson Stormtrooper

Back to Star Wars Black 6″ Series