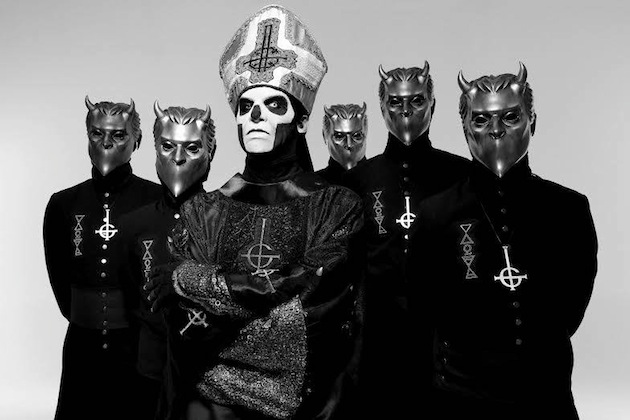 Many bands claim to be “about the kids” but at their Las Vegas show Ghost showed that they really mean it with an act of kindness.

When you think of bands doing nice things the Satan worshipping clergy of Ghost perhaps aren’t going to be the first to come to mind. However, the evil gimmick is just that as the band have always said it’s just an image and that they aren’t really devil worshippers, with many fans discovering that the band are actually really sweet.

Case in point was at Saturday October 22nd’s show at The Brooklyn Bowl in Las Vegas, Nevada where fan Todd Ashworth was seeing Ghost live for the 5th time but had brought his 9 year old daughter along for the first time. While Todd and his daughter were in the front row, Nameless Ghoul Alpha threw one of his guitar picks to the young girl but unfortunately it went over her head and they weren’t able to find it but Alpha came to the rescue as a few minutes later his guitar tech came over to give Todd’s daughter a package from the mysterious guitarist – some Ghost money with 5 guitar picks!

Despite the fearsome image the band have always taken time for their younger fans as can be seen in the gallery below and have even been interviewed by children in the past, including a young fan named Elliot as well as Connie and Olivia from Kids Interview Bands. Ghost are currently touring in support of their Popestar EP featuring the blistering single and Gear4Geeks favourite Square Hammer, where they have debuted a new Ghoul who is also perhaps the first female Ghoul to be in the band.

Check out our gallery of Ghost with kids

2 thoughts on “The Nicest Band in the World: Ghost?”