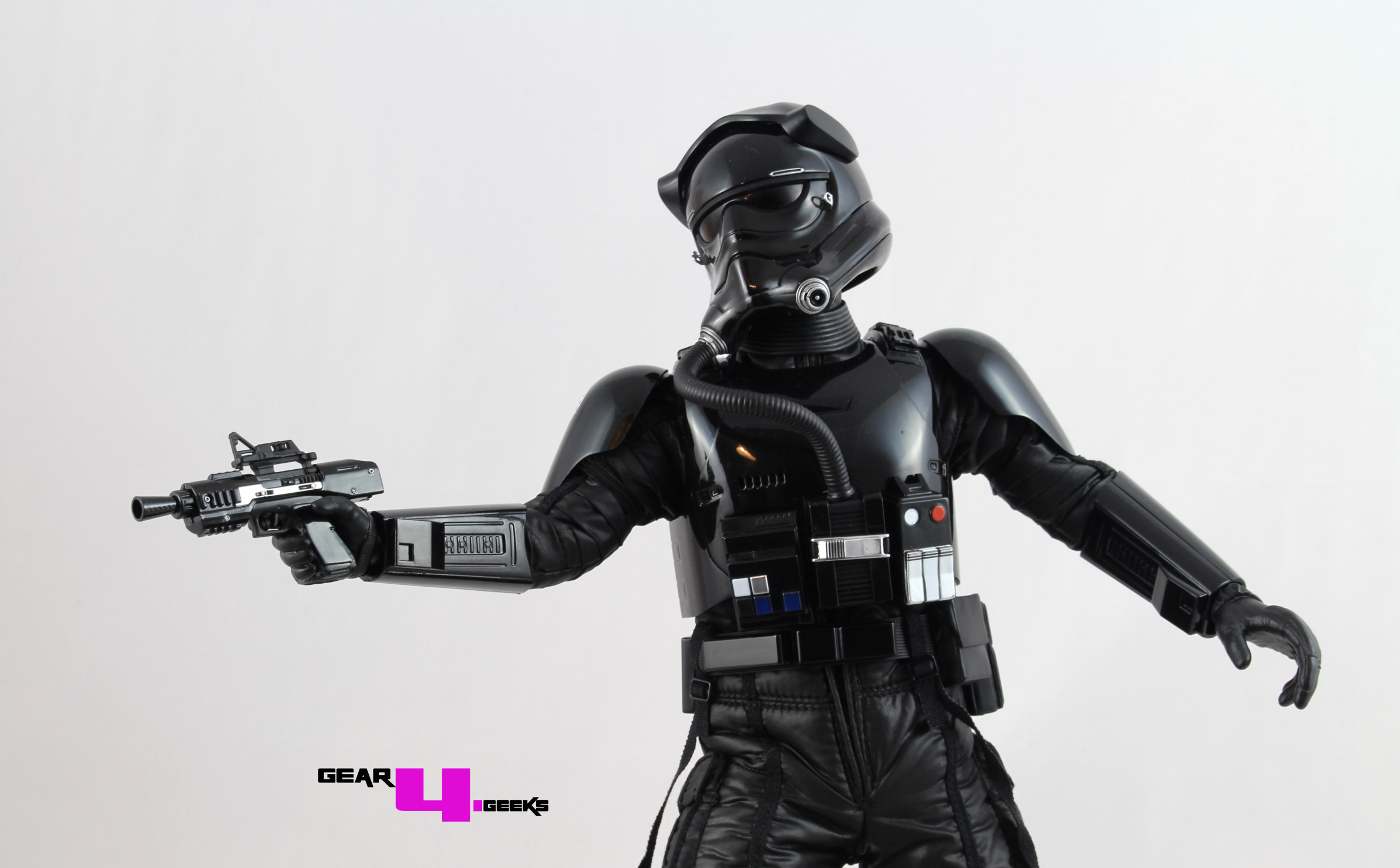 Our look at the first of several Hot Toys Force Awaken troops!

This is a figure I’d been looking forward to from the announcement of the preorder as it looked incredibly sleek and to be a nice update from the original trilogy version of the TIE Fighter Pilot, especially with that really cool visor on the top which gave a new dynamic to the pilot design.

In the Iron Legion review I made fun of the increasingly long acronyms that Hot Toys are using on the shippers but the Star Wars line has gone maybe a bit far in the other direction by only using 2 letters (TP) to denote the figure inside which is fine for the TIE Pilot but not so much for Stormtroopers and Snowtroopers as it gets a little confusing.

The box design is that classic Star Wars black look but unfortunately this one came with a complimentary big scuff down the front as you can see at the top left. I’m not a stickler for box condition but it’s nice to get expensive figures in as nice condition as possible. As always, the photography of the figure here is incredible and continues the tradition of Hot Toys boxes looking like they have a picture of the source material on the packaging when it’s actually a toy photo.

The back is pretty plain but the minimal approach works well here. Once the lid is off though we are greeted by this glorious sight:

I have no idea how much Hot Toys’ photographer or art department get paid but they earn every penny when they knock out packaging this beautiful and this insert only makes me want to get my hands on the figure inside even more. After waiting 6 months it’s a big ask to wait much longer.

Straight out of the box it’s easy to see the design changes from the OT Pilot and the First Order version as we’re presented with a more streamlined pilot who seems more combat ready than his large helmeted predecessor. The First Order Pilot is essentially a lighter armoured Stormtrooper and with the minimal respiratory gear it’d be easy to mistake this for a Shadowtrooper or something similar if not for the ejection harness straps on the legs. The jumpsuit is a puffy fabric this time around rather than the regular flight suit with armour pieces over it which nicely bulk the figure out.

The back armour panel has the Stormtrooper inspired Record and Pause button motif but it’s easier to see here that the ejection straps don’t seem to serve much of a purpose, not that the X-Wing Pilot straps did either but then they at least looked practical. The joints on the figure are nice and still as you’d expect from Hot Toys and a nice touch is that the extra hands already have the spare pegs installed in them to theoretically make it easier to swap the hands out.

Now we’re talking, it doesn’t take much in the way of posing to bring out the badass in this figure.

The pilot doesn’t come with much in the way of accessories, some spare hands, a stand a hold out blaster are all you get but then a pilot isn’t a figure you’d expect to be armed to the teeth. The pistol is a little reminiscent of the Biker Scout pistol from Return of the Jedi which is another nice touch as it creates a feel that Force Awakens and the original trilogy are connected, rather than the massive contrast between the OT and the prequels.

This is a beautiful looking figure but there are three niggles – the shoulders, the visor and the helmet. The shoulders are on a strap like the real costume is but unfortunately Hot Toys have connected the plastic shoulder shells right next to the body armour so it’s impossible to angle the arms outwards and it severely limits movement. The visor itself is completely static and while we’re never shown a pilot the visor down in the movie, the piece looks like it should move so it’s disappointing that it doesn’t. On a slight tangent here the visor is supposed to be a Heads Up Display rather than to block out glare (the pilots have tinted eye lenses anyway) so shouldn’t they permanently be down in flight? I’m guessing it was an aesthetic thing.

Okay so lastly the helmet – the thing is made of a different plastic to the rest of the armour. It doesn’t stand out here thanks to the lamps but it’s most noticeable in the picture towards the beginning after the one of the inside box art. While the body armour is nice and shiny the helmet has a matt look which makes it almost look rubber.

Overall despite a lack of accessories and arm poseability, the attention to detail on the figure is awesome and this figure is a great looking piece. At the time of release I paid £199.99 but they can generally be picked up now for sub £150 new which makes it a must buy, although it’s sad to see the Force Awakens figures nose dive in price as they are generally all beautiful figures which are definitely worth picking up. For once army building Hot Toys is relatively cheap.