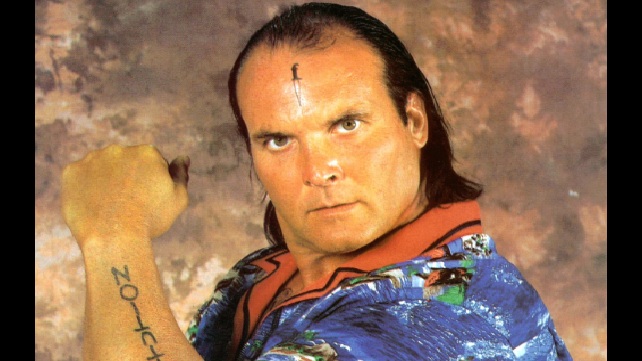 Pro wrestling takes a lot of flak for being scripted and not “real” like UFC but occasionally matters get a little heated and the wrestlers end up fighting each other for real. We look at 5 of the lesser known “shoot” incidents in wrestling.

This incident featured an all star cast of wrestling legends before they were famous.

NWA official Teddy Long had been fired as a referee in storyline after screwing The Road Warriors out of the NWA Tag Team Titles. He turned to managing, creating a team to feud with The Road Warriors – The Skyscrapers, which paired 6 foot 8 inch ‘Dangerous’ Dan Spivey and 6 foot 9 inch ‘Big’ Sid Vicious. While Sid was fairly inexperienced, Spivey was a veteran who was a career tag wrestler having helped the very green Scott Hall years earlier when they were partnered as American Starship and replacing Barry Windham in the US Express with Mike Rotunda. The Skyscrapers were pushed hard to be a threat to The Road Warriors including winning a massive battle royal and impressive wins over The Dynamic Dudes. When The Skyscrapers and the Road Warriors finally met, their matches were booked to be even and usually ended with disqualifications to keep both teams strong. Unfortunately, during a super stiff match against The Steiner Brothers, Sid was left with a broken rib with punctured a lung. While he was out, Long brought in 6 foot 10 inch newcomer ‘Mean’ Mark Callous.

Hawk of The Road Warriors was known for being a bit of a jerk – he had a reputation for not selling opponent’s offence, for being stiff and for taking advantage of other wrestlers in addition to having a pretty bad alcohol and drug problem. His partner, Animal, also could be unpleasant but for the most part was okay unless provoked.

During the program Spivey was getting increasingly frustrated with the Warriors getting $1000 each a match while he and his partners were getting $200 a match despite Spivey calling the matches and coaching Sid and Callous who were both pretty green. ‘Precious’ Paul Ellering, the on-screen and off manager of the Road Warriors was even being paid more than the Skyscrapers. In addition the Warriors were taking advantage of Callous and during the Clash of the Champions X face off between the 4 big men, things got heated. Callous looked bad in the match due to a combination of inexperience and the Warriors either not selling for him or selling badly but when the Warriors dumped Callous out of the ring in a fairly stiff spot (they hit Callous too hard so instead of flipping the top rope and landing on his feet he went out lack a sack of you-know-what), Spivey had enough. The end of the match went to it’s scheduled finish with the Scrapers getting DQed but then Spivey picked up a chair and went to town laying in shots with no give in them. The only light shot was one where Callous was in the way but the majority of chair shots were aimed at the back of Hawk’s skull. Neither man confronted Spivey afterwards as he was a legitimate tough guy.

The Road Warriors jumped to the WWF later in 1990 and were renamed The Legion of Doom where they became Tag Team Champions and the first team to win the AWA, NWA and WWF tag belts. Sadly Hawk’s issues started to get the better of him and he left in 1992, breaking up the Road Warriors/LOD until 1996. They would return to WCW briefly before rejoining the WWF until 1999. In 2003, with Hawk now sober, they appeared on Raw against tag champions Kane and Rob Van Dam but weren’t hired after Hawk failed to sell pretty much anything. Hawk would pass away from a heart attack five months later, aged 46. The Road Warriors were inducted into the WWE Hall of Fame in 2011.

The Steiners continued to go on to be one of the best tag teams in history with their ultra stiff style but Scott Steiner would break out as a singles star with multiple WCW Heavyweight Championship reigns.

Barry Windham became best known as a long standing member of The Four Horsemen and is the uncle of current stars Bray Wyatt and Bo Dallas.

Mike Rotunda is best known as the evil accountant Irwin R Schyster and is also the father of Bray Wyatt and Bo Dallas.

The Dynamic Dudes never really went anywhere as a tag team. Jim Cornette opted to switch sides to manage the Dudes to try and get them over in their feud with The Midnight Express, but the fans hated the Dudes so much that they cheered the heel Express. The Dudes split with Animal’s younger brother, Johnny Ace heading to Japan to wrestle where he popularised The Ace Crusher move which later was used by ‘Stone Cold’ Steve Austin as The Stone Cold Stunner. Despite not being a particularly good wrestler, Ace was a top draw as a foreigner and would remain in Japan until he retired in 2000 and replaced Vince Russo as booker in WCW. When WCW was bought by WCW, Ace would become a road agent before replacing Jim Ross as Vice President of Talent Relations for WWE and was mentioned by his real name, John Laurinaitus, by CM Punk in the infamous ‘Pipe Bomb’ promo leading to Laurinaitus becoming an on-screen talent. The other half of the Dudes, Shane Douglas, went on to team with Ricky Steamboat in an incredible feud against ‘Stunning’ Steve Austin (later Stone Cold Steve Austin) and Brian Pillman before leaving for Eastern Championship Wrestling. When the NWA became WCW, Douglas won a tournament for the vacant title and declared in an infamous worked-shoot that the NWA was dead and renamed Eastern Championship Wrestling, Extreme Championship Wrestling.  Douglas was encouraged by bookers Todd Gordon and Paul Heyman to regularly shoot in interviews, as Douglas and ECW went on to revolutionise American wrestling, leading to WWF’s Attitude era.

Sid would go on to the WWF to feud with Hulk Hogan, return to NWA/WCW but he’d be fired after a real life hotel brawl with Arn Anderson where both men ended up with multiple stab wounds. He became a major star and World Champion in both WWF/WWE and WCW between 1995 and 2001 but is sadly most famous for snapping his leg during the main event of WCW’s 2001 Sin PPV.

Teddy Long would eventually become a referee for the WWE and General Manager for Smackdown.

Scott Hall would go on to be success as Razor Ramon and competing under his own name in WCW as part of the NWO. He would be inducted into the WWE Hall of Fame in 2014.

‘Mean’ Mark Callous would join the WWF in 1990 and was renamed The Undertaker, becoming one of the biggest stars in professional wrestling ever.

Dan Spivey walked out of the NWA shortly after the incident as no action was taken against The Road Warriors. Returning later in the year he would go on to win the tag titles with Stan Hansen in 1991 and would leave the company again while champion. He’d remain until he left for good in 1995 and debuted in the WWF as Waylon Mercy (pictured in the top image) where he noticeably struggled due to injuries and ended up retiring after a few months. His last televised appearance was a count out victory over then WWF World Champion Diesel (Kevin Nash). The Mercy character could have been huge for Spivey and is seen as being one of the best gimmicks of it’s time but it’s legacy became even bigger through Windham Rotunda. While working as Husky Harris, Rotunda would use Mercy’s “know what I’m saying?” followed by a laugh but would mainly use the Waylon Mercy character as inspiration to redevelop himself into Bray Wyatt. Spivey would meet with Rotunda to discuss the Mercy and Wyatt gimmicks, making him connected to three of WWE’s most memorable evil characters – Mercy, The Undertaker and Bray Wyatt.

On to 5 Times Wrestling Got Real (NSFW) #4: Antonio Inoki v The Great Antonio