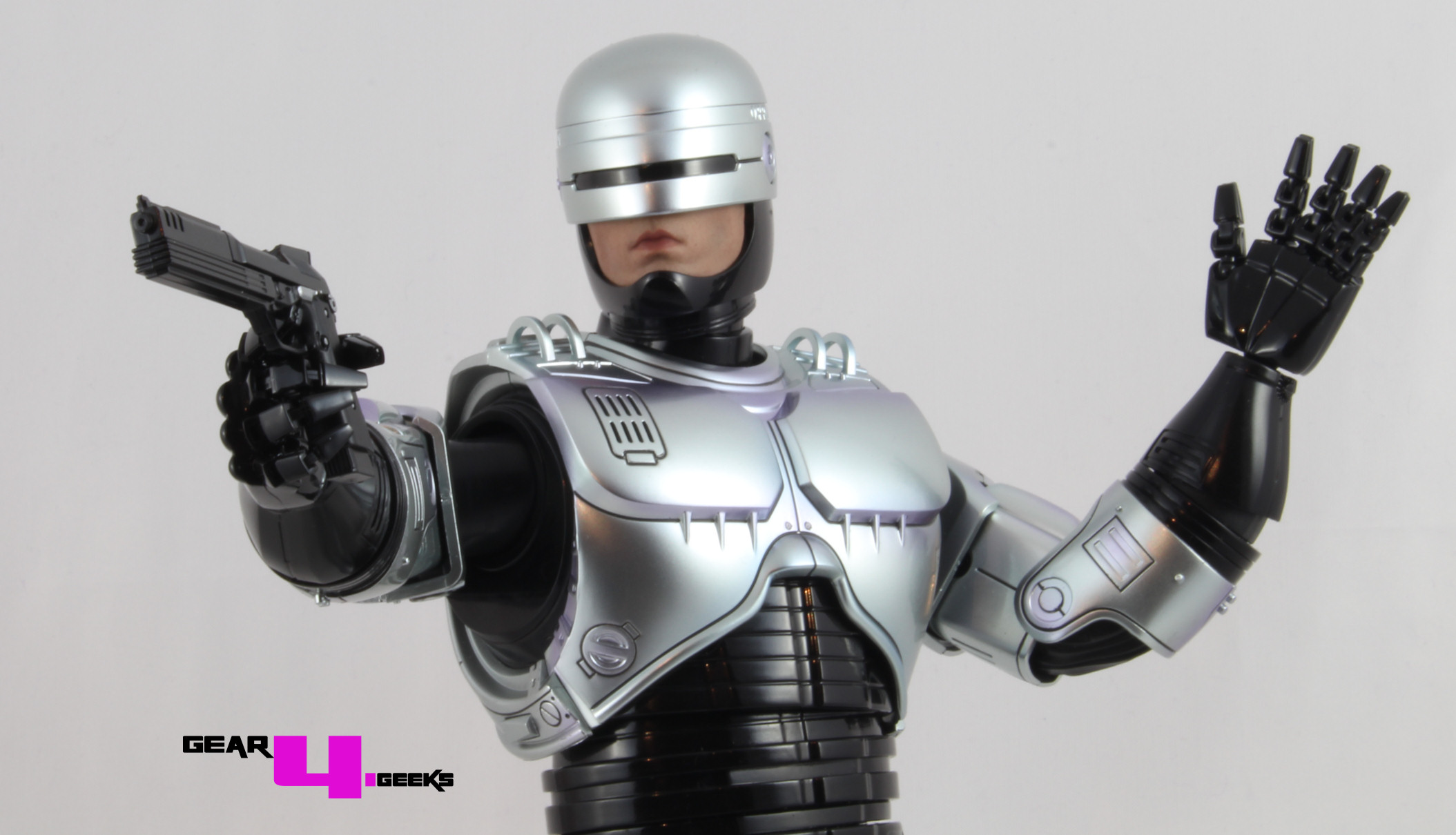 One of the most iconic characters from the 80’s in highly detailed plastic form but how good is the Hot Toys Robocop?

The 80’s generated some of the most memorable characters in movie history – Rambo, Predator, The Terminator, John Matrix, John McClaine, Murtah & Riggs, Indiana Jones, Mad Max, Freddie Krueger and Robocop. Set in the not so distant future in a Detroit that isn’t that much different from how it was in the 80’s (or now for that matter) the film followed heroic cop Alex Murphy as he’s gunned down by Red Foreman from That 70’s Show and the surgeon guy from ER then rebuilt into the Christ-like figure of Robocop. This is a figure that was released in 2014 so it’s no spring chicken but it’s recently been reduced by wholesalers so at £200ish it’s now a lot more affordable than it’s previous £300 price point.

Unlike other Hot Toys shippers this one is fairly easy to understand when it comes to identifying what’s in the box.

Out of the shipper the box is the high quality type that Hot Toys tend to use with die-cast releases, it splits in the middle allowing the top to be lifted off revealing the solid styrofoam block inside.

The back of the box features the artists involved but is otherwise sparse but fits with the clean, almost robotic feel that they’ve gone for with the packaging.

Once opened up we are met by the rather impressive solid block of styrofoam which features the Robocop logo engraved into the front. The outer box wasn’t too exciting but now we’re cooking with gas!

Hot Toys really know how to optimise their packaging and the back of the foam has a plastic tray in it that stores the logo/base. It’s only a small thing but this level of packaging design really gives this the feel of a high priced collectable.

Ooooh now we’re talking. Murphy comes with 3 alternative face sculpts, 2 alternate hands with jointed fingers, a fist with data spike interface, 2 pistols (1 plastic and 1 die cast), a battle damaged chest plate and a battle damaged helmet. It’s not quite as many accessories as you get with many Hot Toys figures but then the die cast here is the big cost and presumably more parts would have driven the considerable price up even further, however the lack of a complete Murphy face seems to be a deliberate omission designed to help sell the Battle Damaged Robocop/Alex Murphy double pack which was released later.

Normally I up the brightness and contrast a bit in pictures to make the figure ‘pop’ a little but for this review I left the settings alone to give a better idea of the pearlescent finish to Robocop’s armour which makes it silver but also has the shimmers of blues, greens and purples exactly like the armour in the movie. Most Robocop toys are a simple silver colour but this perfectly captures what you see on screen and even though that’s kinda what you expect from a £300 figure it’s also a detail that most people wouldn’t have noticed if it wasn’t present. Another beautiful touch that’s easy to miss is that the first knuckle on the feet (the one nearest the toes) is slightly jointed.

It sounds daft but the feet are really amazing; from the slight joint in the toes to the working pistons running down the backs of the calves the legs are very impressive. They are also a lot more articulated than I was expecting.

The arm articulation is…well, it’s ugly. Outwards you get about 30 degrees of motion but then that requires pulling the arms out which exposes the joint itself and that really isn’t a good look. The wrist joints also have a sizeable gap in them which is pretty disappointing.

Even very basic poses expose the shoulder joint and it’s impossible to pose the figure in anything other than a neutral stance without those shoulders ruining the look. Unfortunately we’re going to encounter this a lot more.

The legs again come to the rescue with the right one featuring the opening holster for the weapon.The die cast gun is intended to be used in the leg and the plastic one to be held in the hands as the hands can’t support the weight of the heavier of the two.

The articulated fingers are really neat but they really don’t like holding the gun. Why Hot Toys didn’t include another set of gripping hands is beyond me because as you can see in the picture, the gun will lean forwards or will simply fall out of the hand pretty often.

With a bit of patience you can almost get that classic shooting pose going although the elbow joint doesn’t bend enough and that damn wrist gap rears its ugly head again. However…

Fugly. The first photo wasn’t anywhere close to perfect and from this angle you can see how really ugly the shoulders make this figure.Hot Toys were really clever in the limited number of photos they released as stock photography for retailers to use.

Poses where the arms are close to the figure’s sides look okay thankfully. Considering that Robocop is fairly limited in his movements in the movie then some good poses are still possible.

When it comes to features the helmet simply slides off leaving the lower face behind. This piece is a rubbery type of plastic which needs to be prised off the head which you need to be braver than me in order to remove as the thing felt like it was going to break at any moment.

As much as I had no interest in the battle damaged parts I do have to admit that they liven up a figure which is actually quite limited. The chest and head damage gives a nice contrast to the sleek look of the other parts and nicely replicate the damage seen in the film.

I couldn’t get a decent shot of it as I need a lens that zooms in further but there’s an extra piece inside the visor so you can see Murphy’s eye through the broken visor glass. Again it’s another win for the battle damage armour pieces here as suddenly this figure is imposing again and the limited mobility issues are quickly forgotten.

I’m not going to even cover the sound gimmick because I don’t think any Hot Toys collector really is interested in a sound gimmick as there are plenty of low budget 12 inch figures with sound, the appeal of Hot Toys is their attention to detail. I can’t help but feel that while Robocop here is a damn nice figure, it’s something of a swing and a miss for Hot Toys. Bad articulation, pointless die cast and a remote controlled sound feature are all features this figure could have done without and it wouldn’t have been too difficult to improve the elbow and wrist joints while adding gripping hands. The shoulder joints are a huge issue and the more you compare the figure to the movie suit the more you can see that Hot Toys have gone very wrong with the whole shoulder structure.

As you can see in the picture above the chest piece juts out further than the bits to the side of Robocop’s neck which in the case of the toy would hide the joint better. However the picture above also shows how awful the “wires” on the parts either side of the neck are on the figure.

What’s the verdict then? The Hot Toys Robocop is a fairly flawed figure but it’s also got a lot of love and attention to detail put into it. If you can live with the figure being in the pose above or something similar then you’ll love this figure but if you want more dynamic poses then it’s not the figure for you. People who paid £300 for this must have been furious but at the £200 mark it’s a lot easier to forget the flaws and shortcomings. These can be found for as little as £150 and at that price then only a fool wouldn’t say “dead or alive you’re coming with me”.