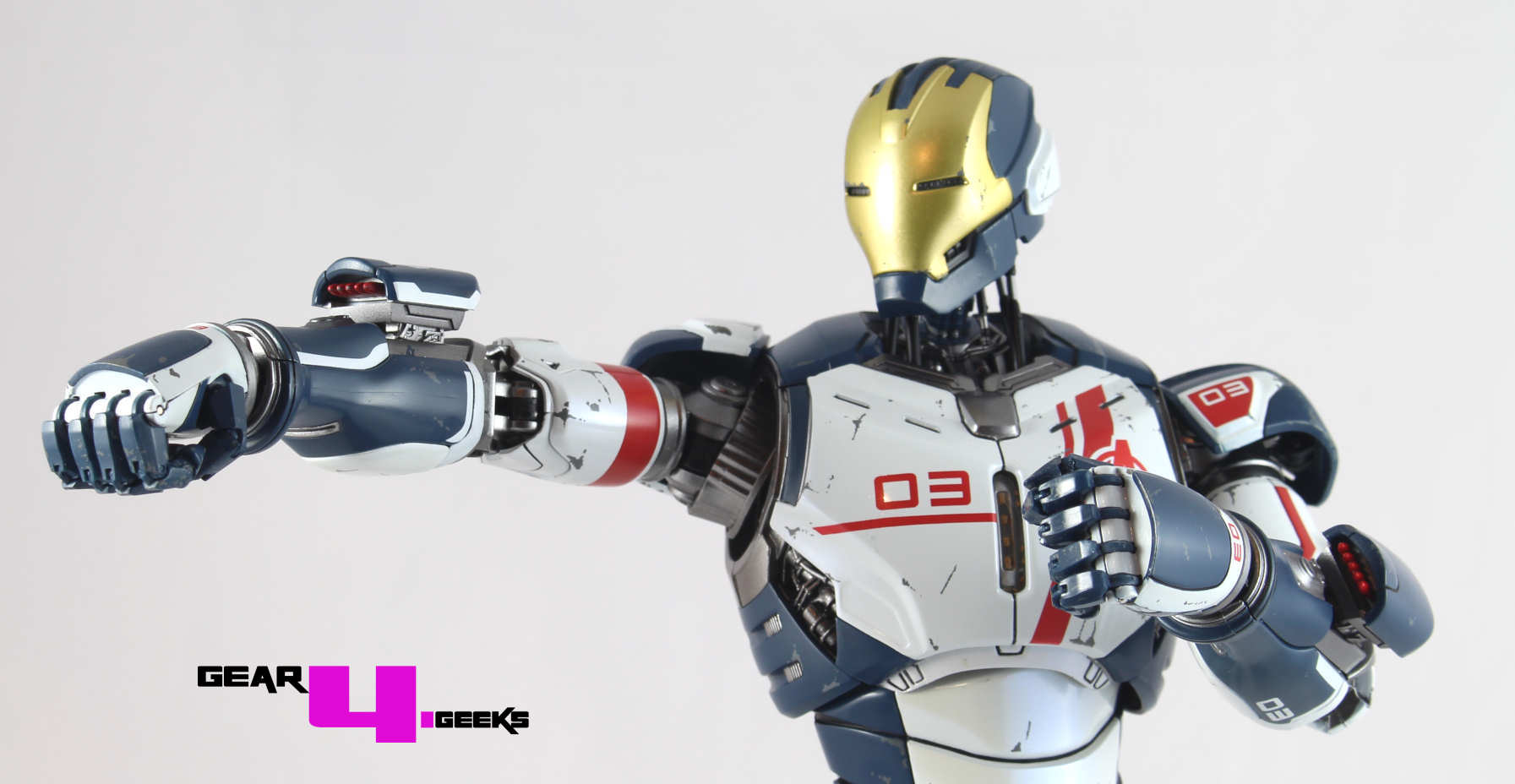 Yet another Iron Man armour figure…sort of. Is the Hot Toys Iron Legion figure worth it?

Another month, another Iron Man figure! I’ll be totally honest in saying that because of the stupid number of hours I work each day, I haven’t actually seen Avengers: Age of Ultron (though it is on my long to-do list) so when Hot Toys first announced this figure I had no idea that it was a drone instead of a human inside the armour. That actually works in the figure’s favour when it comes to detailing, but we’ll get back to that.

Also it’s worth mentioning that thanks to changing my setup a little I’m still finding my feet with the photography side of things so expect better pictures in coming reviews.

First up is the shipper. Increasingly the product details on the box are like a foreign language as they are abbreviated further and further – in this case we have MMS299 AVG2 – IL or Movie Masterpiece Series 299 Avengers 2 Iron Legion. Bit of a mouthful!

The front of the box isn’t one of Hot Toys’ better efforts but still makes this feel like a premium collectable with the beautiful picture of the figure and Avengers logo overlaid.

The back of the box however is pretty bland by comparison although it does list the design team who worked on the figure, a small touch but one that I would like to see on all figures.

Out of the box the Hot Toys Iron Legion figure itself is a beautiful piece of work. In the shot above it looks perhaps a little gangly which is purely down to me not realising how good some of the articulation is in the figure until I looked over the small leaflet which mentioned some of the small touches that aren’t immediately obvious. Initially I found the figure difficult to stand up in a neutral pose but we’ll come back to that. The figure’s colour scheme is a nice departure from the standard Iron Man red/gold combo and the solid colour blocks we’re used to – Iron Legion has trims of detailing over the main paint blocks which give it a much busier and perhaps realistic look than other armours. It did strike me as looking a little like an Olympic speed skater’s outfit but either way, it’s a breath of fresh air in terms of Tony Stark’s armours.

The back continues the intricate detailing and there’s that metal spine and ribs which really stand out and give the figure a nice cybernetic look, which is fitting for the figure. I mentioned that the figure was difficult to stand in a neutral pose like many 1/6 scale action figures are but that was because I hadn’t realised that the figure has an abdominal crunch to give it flexibility and also the ankles are on extending ball joints. In the box the ab crunch was making the figure tilt slightly forward and one of the ankles wasn’t quite level with the other, but with a little adjusting the figure suddenly took on a whole new dynamic.

I’ve inserted this as a large scale image because in smaller scale it’s easy to miss the neck details. It may not look much but the skeletal neck with hydraulic parts is another wonderful part of the Legion’s design as it gives the figure a unique feel. The weathering is great as it gives you a sense that this is a bot that has seen some action and it also compliments the busier design scheme.

From this angle the shape of the faceplate with the exposed machinery between it and the jaw piece give a nice halfway look between Iron Man and Ultron’s head.

The hands attached to the figure in the box are articulated at each joint which add more posing choices although it’s safe to say that most people will have the hands as fists or open. Again the detail on the hands is phenomenal and just goes that extra mile.  The default hands have very little flex in the wrist and so the other set of hands are open handed for posing as if the repulsors are being used, presumably this is down to the electronics in the hands.

The chest plate is removable and has more great detail work under it although I’m not sure if this was really needed as I can’t see anyone choosing to display it this way.

Close but not quite there. Maybe it’s me but I couldn’t quite get him into the classic Iron Man/overused-superhero-crouch pose due to some of the armour getting in the way and some limited articulation in the hips although as this isn’t Iron Man himself, I’m not sure if anyone would pose Iron Legion this way. The articulation isn’t bad at all but poses which require a lot of movement like this one just aren’t going to happen.

There’s very little in the box, just the extra hands, batteries, a stand and these mini launchers. Attaching them requires the forearm plates to be removed then these are stuck on instead but they give a slightly more menacing appearance.

I do love how this figure can be posed without the stand and it is very even with its weight distribution despite being a fairly heavy figure. If you intend to pose the figure in flight then a dynamic stand is going to be a mandatory purchase as the crotch grabber included can’t really take the weight.

So is it worth the cash? Well it’s pretty hard to stomach the hike in price of Hot Toys’ action figures generally as new figures are hitting £200-£220 but when you compare Iron Legion to other Avengers figures like Scarlet Witch, Quicksilver or Hawkeye who are all in the same price range then it’s definitely worth it. Sure, it isn’t the most articulated of figures, it’s a little awkward when trying to find decent poses and it’s very light on accessories but once placed in a cabinet it really stands out from other figures, especially Iron Man armours due to the unique colour scheme.

The other thing here is that this figure seems to have been only ordered in small quantities as many retailers sold out on preorder and it hasn’t been that widely available, possibly due to a lack of interest. With Iron Man collectors getting hammered with Houseparty Protocol variants, Hot Toys Iron Legion was one that could be passed on by some collectors as it’s not technically an Iron Man armour and the figure isn’t exactly must have for Avengers collectors. Is it one to snap up because there aren’t many around or is it one that is likely to plummet in price as the few available won’t sell? Time will tell on that one. However, with the figure available in some places on offer for £150 it’s definitely worth snatching up as it is a definite grower and could end up a firm favourite in people’s collections.

While Forbidden Planet are sold out of Hot Toys Iron Legion you can still view their Hot Toys figures here.