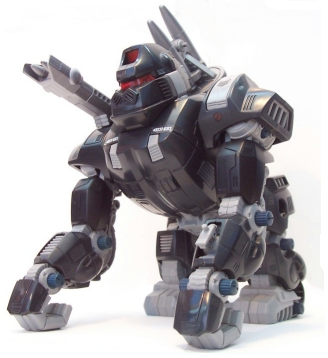 5.  Gobots
Most people are happy to write off Gobots as a poor man’s Transformers but Gobots actually had a lot going for it if you can look past the really bad pun names of Cy-Kill, Cop-Tur and the others.

While a lack of variety hurt the line initially, it’s hard to deny that the Gobot figures were pretty cool. The cartoon wasn’t great but reviving Gobots with an aimed-at-adults comic like IDW’s Transformers: More Than Meets The Eye could create a good cult following. Masterpiece styled Gobots are in the works as toys already so a full revival would be easy to do. Plus, Gobots was pretty pioneering in that there were several female characters years before Transformers and unlike Arcee, they weren’t pink with feminine features. Both Crasher (above) and Pathfinder (below) were female in the cartoon and feminised somewhat but Pathfinder is still the coolest looking Gobot.

4. Starcom
Starcom didn’t do well in the US but was pretty well received in Asia and Europe. The toys consisted of small figures, a lot of vehicles and some playsets with various motorized features and gimmicks. While they weren’t mind blowing they were imaginative and definitely fun but were secondary to the juggernaut of Transformers which dominated boys toys in 1987.

While Starcom definitely had an issue of being a “US Space Force” and needed slightly different branding (like GI Joe) in foreign markets so perhaps a small scale reboot could work if the toys were marketed as an international team.

3. Action Force
This one is a bit confusing. In the US there was GI Joe, in the international market GI Joe was named Action Force but before that there was another Action Force in 1983. As sales of 12″ Action Man figures dwindled due to children being more interested in the smaller Star Wars figures, Palitoy decided to shrink the range down and released 4″ figures based around military figures. The first wave consisted of a German Stormtrooper, a frogman, a British Commando, an SAS soldier and others and sold very very well.

The second series reused a lot of the first figures but now split the figures into a terrorist group, The Red Shadows, along with 4 good guy groups – Z Force, Space Force, Q Force and SAS Force. The second wave of this new lineup heavily mixed in GI Joe figures, some of which were repainted to bolster the massive line.

The second wave of this second generation really captured kids’ attention with the introduction of Roboskull, a TIE Fighter with a skull as the cockpit, along with other imaginative vehicles. The mini comics and the full comic didn’t shy away for violence and regularly featured terms like “interrogation” and “brainwashing” plus the weapons fired bullets, all of which were departures from the US GI Joe line. The line was merged into GI Joe (rechristened Action Force) in 1985 but we reckon a modern gritty version of the second generation featuring The Red Shadows, SAS Force and Z-Force could be an adrenaline shot for the struggling GI Joe line.

2. Zoids
Big honking robot dinosaurs and animals battle it out. If that doesn’t scream “money” then nothing does! Ditch the pilots, give the Zoids personalities (like Transformers did to the Diaclone toys) and release more than the same 5 kits over and over, then this is a no brainer.

1. MASK
In 1985 transforming vehicles were all the rage so instead of robots these vehicles transformed into other vehicles. In an idea that was both cool and dumb, MASK fought VENOM with cars that turned into jets or bikes that turned into helicopters – in short a health and safety nightmare.

While the first series of vehicles was pretty basic and underwhelming, the idea was definitely a success and captured the imaginations of children for a limited time. The cartoon only lasted for two series and the toy line for only three with the last year being about two different racing teams (?!?!). The line seemed to face two major problems – 1. The toys were smaller than the accepted-as-standard 4″ Star Wars and Action Force figures 2. A lot of the vehicles featured very little in the way of conversion and just looked like a car or bike that had fallen apart. There were some cool designs especially later on like Bulldog/Bulldoze but we feel a new toy range where both modes look good would capture the imagination of kids all over again!

Did we miss one of your favourites? Let us know!